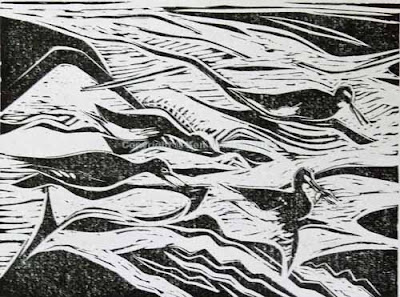 I think I mentioned in last few posts that I like going back and forth between the more careful, detailed, restrained style of some recent watercolors and the greater boldness, simplification and greater abstraction in my linocuts.

Since I've done a number of such watercolors over last few weeks it seemed time to get back to linos. But what subject? 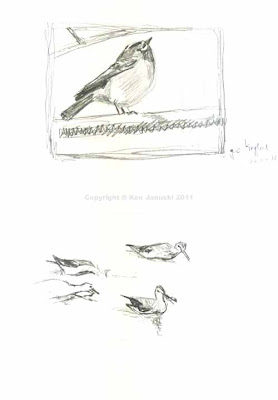 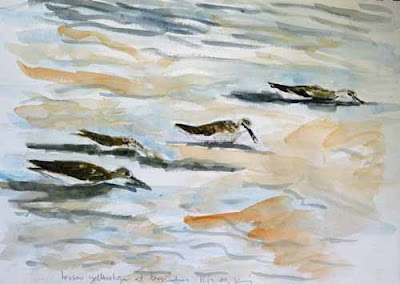 I did a number of sketches as tests and finally settled on four feeding Greater Yellowlegs that I saw a couple of years ago. I was tempted to do the Golden-crowned Kinglet on same sheet of paper but finally opted for the yellowlegs. I'm also showing a watercolor I did of them from a photo from a year or two ago.

This watercolor is much different from my recent ones but that's because at that time I was trying to develop some freedom with watercolor and not use it tentatively as just a medium quietly at the service of the underlying drawing. At that time I skipped drawings and tried to do it all with a brush. It was a very useful learning experience, and one that I'm sure I'll go back to.

For now though I just wanted to use the basic scene as the basis for a lino. One difference is that I substituted one feeding yellowlegs with another one that had actually caught a small fish.

And pattern? Why title the blog 'Sensing a Pattern?' Well I realized back when doing the Laughing Gulls linocut that both woodblock prints and linoleum block prints really lent themselves to lines, and to patterns formed of lines. Though I've tried to give some sense of modeling(the creation of a sense of roundness) to my linocuts this isn't something that these woodcut or linocut excel at. At best you can use a type of hatching to suggest roundness. But you can't use the actual modeling, the gradation of color to suggest modeling, that comes so easily to painting. So modelling is difficult and somewhat counter-intuitive in these media.

In this print I decided to greatly lessen modeling and instead concentrate on a flatter design with more sense of pattern. Water lends itself to pattern so this also seemed a good reason to concentrate on pattern.

Just one problem: I can't really see patterns before they're there in front of me. Some people might be able to visualize how to develop a pattern in a print before they start carving. But I can't really tell what type of patterns I might want to use until something in the first proofing of the print suggests itself to me, just as some sculptures tend to see a pattern in a piece of wood or stone.

I've developed a pretty strong sense of pattern here, perhaps so much that it overshadows the yellowlegs. I don't think so but I think it's time to take a break and let this sit. As with watercolor it's too easy to cover everything with color or cut away all the linoleum. Sometimes it's best just to stop and take a break.

This is 6x8 inches on printer paper. Once I'm finally happy with it I'll print an edition on good paper.
Posted by Ken Januski at 2:07 PM