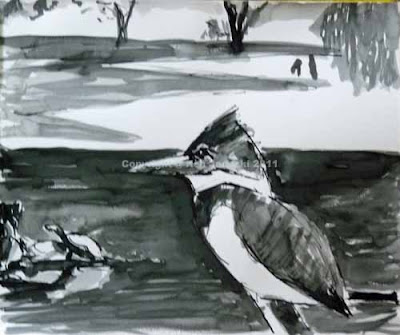 Even when I was out doing the recent field sketches of Belted Kingfisher and Painted Turtles in nearly 70 degree temps, there was snow all around me. Yesterday was the second day of the Great Backyard Bird Count and yet it was so windy that there were almost no birds at our backyard feeder and only one solitary Ring-billed Gull in my 20 minute walk around the Roxborough Reservoir. So spring was here just briefly. Today it's back to being cold and snow is in the forecast over the next week.

Still I did think about capturing the odd juxtaposition of turtles basking on logs in the sun while the surrounding ground was covered in snow. And I also wanted to get the kingfisher in. He was in the same pond, often perched on snags, but never close enough to be in the same view. I did something similar last year with a Great Blue Heron and Belted Kingfisher also seen in the snow for the GBBC. The birds were never so close together that they'd appear in a photo if I were to take it of the actual scene, at least not large enough to be identified. But artistically I wanted to put them in the same scene, to take some artistic liberties.

I'd recently seen some wash drawings that I'd like. Some were by John Constable, others by Claude Lorrain. Both reminded me of how much I enjoyed wash drawings. So when I looked for a way to experiment with designs for a finished work, maybe watercolor maybe linocut, I thought about doing a wash drawing. But how to do the ink drawing?

For years I used to do large nudes using a bamboo reed pen. I see you can still buy a set of three for under $4. They are a bit messy because there's no reservoir to hold the ink. You just have what sticks to the end of the pen when you put it in the ink. But they do make a very quick and fluid line. That's what I always loved about them. In any case I got out one I hadn't used in 30 years or so and used it with some equally old India ink. Then after that I used watercolor brush to add wash and straight India ink.

There's room for improvement in this. But it did what I wanted, allow me to test out a quick design that combined bird, turtles and snow. I think it stands alone. But it also may be just one step on the way to something more developed. I do love capturing these odd natural moments.
Posted by Ken Januski at 10:09 AM