Steps Along the Way 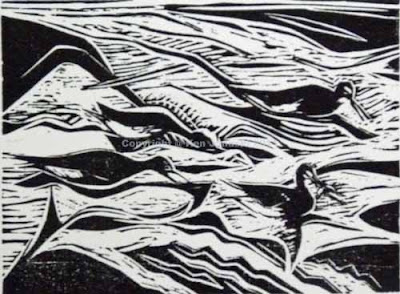 This is one of the prints from a finished edition of 12 of the Greater Yellowlegs feeding. I made extremely small changes to it from the last version that I posted. There is much detail lacking in the plumage and I was sorely tempted to put it in. But I was afraid that if I did some of the stark contrast would disappear. The print might be more naturalistically accurate but artistically diminished. After a few days of thinking about it I decided to leave it as is. I'd like to experiment with bolder prints and I think that this is the only way to get there.

Above I'm showing the first 6 proofs of this print. They show the progress as I went along. Many artists from what I can tell have a good idea as to how their finished print will look and just start carving and keep going. But I'm not like that at all. Who knows if I'll ever work that way. Instead I have the vaguest idea of what I want and then improvise as I go along, reacting to each proof and then making changes based on what I see. So I thought some readers might be interested in seeing this. As you can see at top left I start off with only the vaguest sketch of the Greater Yellowlegs. I don't want deep cuts to begin with because I first want to see what they look like. If I'm happy with them I'll eventually make deeper, bolder cuts. If not, well I'll try my best to cover them up!

The finished edition by the way is for sale at my Printsy site. Complete images are 9x11 inches, and the image along 6x8 inches. This is an edition of 12 on Rives Lightweight paper, using Gamblin oil-based inks.
Posted by Ken Januski at 2:08 PM