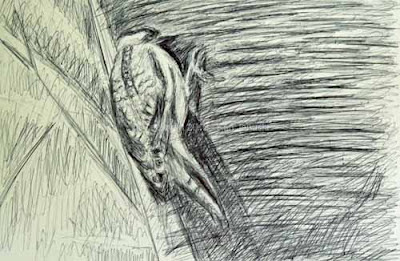 One of the truisms of early spring birding in the areas around home that I bird is that it will be the Season of the Woodpeckers. It is often a frenzy of activity and variety, made all the better by the fact that most trees haven't yet leafed out and birds are easy to see. A few days ago at Carpenter's Woods we saw 6 species of woodpeckers: Downy, Hairy, Northern Flicker, Red-Bellied, Pileated and Yellow-bellied Sapsucker. Of the woodpeckers likely to be found in most of the mid-Atlantic US only the Red-headed was missing. Unfortunately we haven't see the one that wintered along the Wissahickon for about a month now and it has probably left.

Our favorite, not surprisingly, is the Pileated. When it flies overhead it almost seems prehistoric because of its size. See it clobber its bill ferociously into a tree a few times and you have to be impressed.

But the star of recent days has been the Yellow-bellied Sapsucker. It's interesting to note that the first thing that All About Birds says is that the bird is not fictitious despite the use of its name for comedic effect. I remember growing up thinking, at least based on the TV shows I watched, that one of the worst, and therefore the best in my mind, insults you could hurl at someone was "You Yellow-belled Sapsucker." Right up there with sidewinder and varmint.

We've seen sapsuckers just about everywhere we birded this week. Most of the time they were on Black Birches. But the odd thing was that the birches were dark, almost as though wet, in many places but light or dry in others. There were no sapsucker holes so the sapsucker wasn't getting sap or insects from holes they'd drilled. Still they went to these trees as drawn by a magnet.

I did take some photos which I often take for references. As I looked a a number of them I noticed that the woodpecker held its head sideways ,flat to the tree. Why? It was sucking the sap! I'd never actually seen this before. The birch sap was running. This what is pictured, however imperfectly, in the sketch above. Though I did a few field sketches this is based on a photo. I don't think I ever could have seen this clearly with my binoculars. So here the greater power of the camera came in handy.

This little bit of knowledge I think shows my nature study is so rewarding. There is always something more to learn and to appreciate. And most times it combines with the web of knowledge that you already have, making it a bit larger and stronger. I used to look forward to this time of year in order to watch the NCAA basketball championship. Now I look forward to spending as much time as possible outdoors, seeing nature seemingly come to life again after a long slumber.

As a side note a search for 'birch sap' turned up some references to collecting birch sap and of course to 'birch beer.' It's amazing what you can learn. I've heard of birch beer and I'm sure drunk some soda version of it at some time. But I'd never asked myself just what it meant, 'birch beer.' Now I know.
Posted by Ken Januski at 8:51 AM