Field Sketching with a Scope 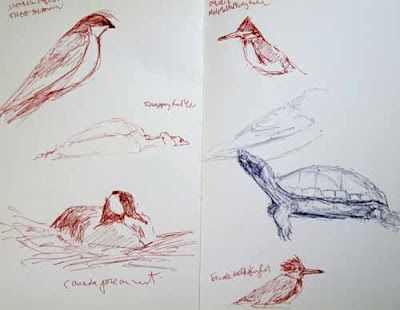 You can blame it on the snipe! It's always easier to sketch live birds when you can see them through a spotting scope. This is because you can see more detail since scopes have higher magnifications than binoculars, and more importantly because you now can look and draw at the same.

It's such a luxury to be looking at the bird through a scope then glance quickly down at your sketchbook to make some marks. When I bird without a scope there's always the need for more than two hands. You need two hands to hole the binoculars, though I know some people can do it one-handed.

But even if I did weight exercises so that I could easiiy lift the binoculars with one hand there's still another problem. While my eyes are up where the binoculars are in front of my eyes my sketchpad is far below, generally around waist level. Often I find that I look at bird with two hands holding binoculars, then drop them and put sketchbook in one hand and pen in another. Great until I need to take another look at bird. Where do I put the pen and sketchbook while I put both hands on binoculars? Often I keep the pen in my right hand and the sketchbook in left as I raise binoculars. This is a good formula for losing sketchbook, pen or both.

I won't go on but you can see the difficulty. That's why it's so incredibly easier to use a scope. The problem is that it is heavy as is the tripod that is necessary to hold it. So I rarely take it out in winter. I don't think it will be worth the hassle of the weight. Come spring it's another story though, as birds finally become prolific.

They're not quite prolific yet but there was another reason to bring out the scope today. We flushed at least two Wilson's Snipe at Morris Arboretum on Sunday. They kept coming back to same location, well hidden until we flushed them again. Never did we get a good look.

So on the offchance that they were still there I decided to bring scope, hoping that I could get a good look, and sketch them, before scaring them off. Well no such luck. There was no sign of any shorebirds today.

But there were turtles and swallows in particular. Above a Tree Swallow, snapping turtle, head low to water, and a Canada Goose on nest on left page. On right a male and female Belted Kingfisher as well as one of many Painted Turtles on a log. It was such a pleasure to be able to look at them and sketch them without constantly lamenting the lack of four hands! 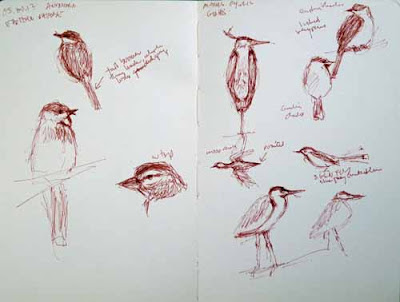 I also did some field sketching without scope over the previous few days. You can see the difference. Eastern Phoebe and White-throated Sparrow on left, wonderful Great Blue Heron with crest on right along with a nother Eastern Phoebe, a Carolina Chickadee, a Wood Duck in flight and the first Blue-gray Gnatcatcher of the year. The latter bird is elongated. I always enlongate them unintentionally. I've vowed that this is the year I finally get them right. Next time....
Posted by Ken Januski at 4:41 PM