Phoebe with No Leaves 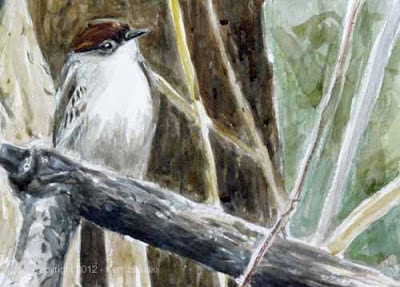 We've seen the first of each over the last week or so, a bit later than normal I think. Soon it will be time for the early warblers, Pine, Palm, Yellow-rump and Louisiana Waterthrush. They've been reported at a few locations throughout Pennsylvania for the last few weeks but we haven't seen any, no matter how hard we tried. Better to wait and enjoy them when we do see them.

My paintings and drawings of Eastern Phoebes from this time always seem evocative of the season. There are no leaves on the trees. There are just bare limbs and often a gray sky. In that setting the rich brown of the Phoebe's head is striking. Later it will be a dull bird amidst the vibrant colors of late spring and early summer. Like the Killdeer those rich browns are plenty for now.

I've also done a few field sketches of Phoebes and Killdeer over the last week or so. But they're nothing special. So instead it seemed better to try a watercolor based on some photos I took yesterday of this Eastern Phoebe seen at Andorra Natural Area, a part of Fairmount Park in Philadelphia.
Posted by Ken Januski at 11:48 AM