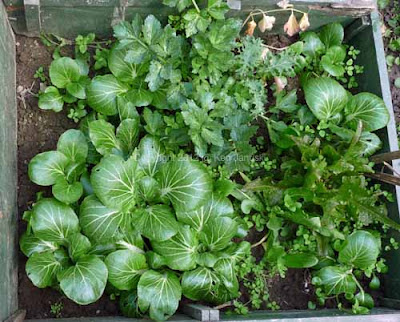 About twenty years ago we ordered a number of small booklets on gardening from Storey Publishing. One of them was about cold frames. I built a cold-frame based on one of the plans in there soon after we got the book.

When I took my very first college art courses at City College of San Francisco there were a number of courses in design. I always was puzzled as to just what design was. Over the years I began to realize that good design was a combination of aesthetics and utility. Something that was well designed did the job it was supposed to do and it did it well. If it seemed elegant then it had aesthetics as well. When you use something that is well designed you take a real pleasure in it.

That was the case with the cold frame. It was collapsible so that I could take it apart easily each year when the weather had gotten too warm to need it, then put it back together in late fall. Finally it started to fall apart, not through bad design but just through the rot that occurs when wood spends too much time in contact with earth and water.

For all my admiration of the cold frame's design I found that I never used it well. We left crops in the garden so late in the fall that by the time I'd harvested them and put up the cold frame it was almost too late to plant anything. What I did plant often stayed dormant until spring, then quickly went to seed. The one good use I made of it was a way to harden off new seedlings and transplants in spring.

But last fall I managed to get a number of choi seedlings in along with a few volunteer transplants from other parts of the garden. Against my better judgement I also planted some mache in late November even though the instructions said that they should not be planted when the weather was not reliably in the mid 40s or higher.

What wonders a very mild winter can cause. The cold frame has been bursting its top with chois. An heirloom lettuce threatens to do the same, as does ah heirloom celery. In other sections of the cold frame rows of mache herald the beginning of spring with the bright lime green of early foliage.

We've had some of the choi for supper the last couple of nights. There's always a sign of incredible optimism, a sense that all's right with the world, when we're able to have the first food from the garden for the year. I'm sure that optimism will continue as new birds arrive daily and plants begin to spring up.

Now back to the drawing board.
Posted by Ken Januski at 9:22 AM

Ken -- the choi looks delicious. That is my goal this year--to build a cold frame so that I have what you have this time next year! Ellen

I'd really recommend that guide from Storey Publishing. The nice thing about it is that it's held together by joinery, not nails, so it's easy to take apart into a fairly small set of pieces when you don't need it. Once the first storm windows broke years ago I tried type of plastic supposedly made for this purpose. But it just couldn't hold up to snow. So I've stuck wih thrown away storm windows.

The chois were delicious. I can't remember if they're Joi Choi or Win-Win Choi from Johnnys. It sure is nice to have such an early start on spring. And I'm sure you'd enjoy it even more in your more northerly climes where it takes a bit longer for warm weather to arrive.

Wish you the best of luck with building and enjoying one!