Delayed by a Gull 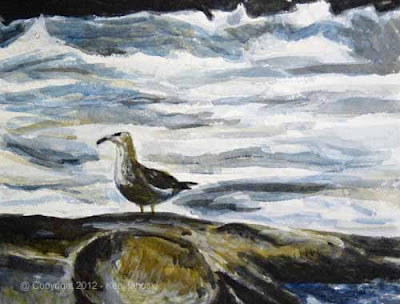 I've done a fair amount of work on the linocut of the Downy Woodpecker and Canada Goose since I showed the earlier states here. But the late April/early May weather here has made it hard to stay inside and work in the studio.

Today we were near Flatrock Dam along the Manayunk Canal in the morning. In the roiling waters perched on a huge slab of stone stood a gull I didn't recognize. That doesn't say much since I just don't know gulls. Often I see a mature Great Black-backed Gull there. But this bird looked more slender, though possibly as large, and definitely didn't have the rich charcoal gray of the mature Great Black-backed. 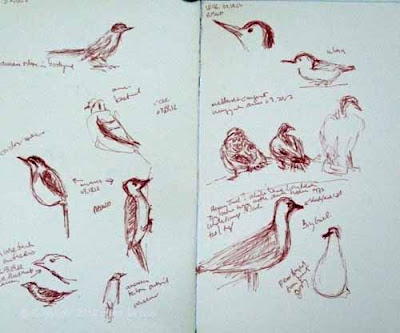 I tried a couple of field sketches, in lower right corner above, but they don't show much. One thing that struck me was the long and seemingly slender neck. He also looked pear-shaped from the front. That's what these two sketches tried to capture. 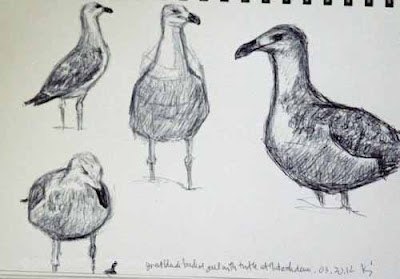 I also took some photos. And though the gull was quite distant I was able to do some sketches based on them. Drawing them helps me often to see things I wasn't sure of when I saw the bird live, like just how big the bill is.

Seeing the bird live I noticed most his slenderness, at least around the neck. That made me think it wasn't a Great Black-backed. But birds can often look more slender than normal when they stretch our their neck. As I drew the huge bill I came to the conclusion that it was a Great Black-backed, in spite of the seeming slenderness.

I also was quite taken by the roaring and roiling water around him. I've never tried to paint such a scene but today I just had to. One of my friends has spent a lot of time recently painting seascapes. She knows how complicated they are, how important it is to begin to understand water. I don't. But I still felt like I just had to give it a try. 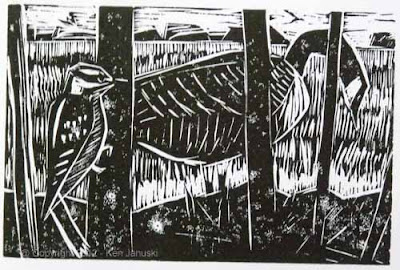 Above is the latest stage of the lino. I haven't touched it in a couple of days. If we ever get some bad weather I'll get back to it. I am happy with it and would like to print an edition. But this good weather can be very distracting.
Posted by Ken Januski at 10:06 PM