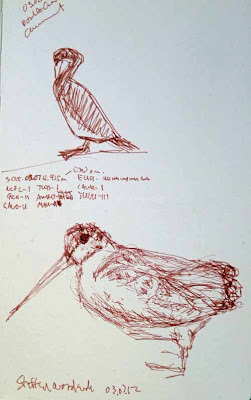 It sounds like the caption on the newest Roy Lichtenstein painting, sold for so many millions. But instead it was my wife's greeting as I showed her my sketchbook when she asked for the results of the newest Woodcock Walk at The Schuylkill Center for Environmental Education. She had intended to go but a late winter cold forced her to stay home.


Richard Crossley says in his 'The Crossley Guide':


Supposedly the commonest shorebird but you would never know it.


I was really struck when I read that after returning from the walk. We've seen four in our life, possibly more. We've flushed them when almost stepping on them in Philadelphia and in Shenandoah National Park. We've seen them sit in front of us and close to 100 other people along the boardwalks of Magee Marsh in Ohio, almost invisible in the leaf litter. And we've also seen one or more in display flights at Black Swamp Bird Observatory near Magee Marsh in Ohio.

The walk at the Schuylkill Center was hoping to hear their 'peent' calls then see them do their fascinating display flight at dusk. And though the weather seemed perfect, warm and somewhat calm, we neither heard nor saw any. I don't think that is unusual for woodcock walks. As I recall the walk leaders at Black Swamp also said they'd turned up empty some nights. Still it's always worth the effort to see this fairly rare display. Far better than anything that might be on TV web or in Tweetville or Facebookland.

But that is nature. The woodcocks don't operate according to a schedule based on entertaining humans. There is one more organized walk at SCEE next Tuesday to try again.

The little trick I was able to play on my wife and provoke the envious explanation was due to a taxidermy specimen that was shown at the center before the walk. As I'd been out sketching and had my sketchbook at hand I took advantage of the opportunity to sketch it. I may have shortened it a bit on the right as I neared the edge of the paper. But much of that odd, unbalanced look is accurate.

As a sometimes outdoor painter I'm always looking for a way to be able to paint outside with minimum fuss and weight. I quickly learned that you need at least four hands: one to hold the drawing surface, one to hold the paints, one to hold the brush and another to hold the binoculars as you look at the bird. Actually you need a fifth to hold a water container. That makes five hands. If you have a scope set up then it's back down to four again since it stands on its own on a tripod.

You see the problem. So I've experimented with various kits. None has really worked well. If you sit down there is some possibility of success as you can then use your lap as a table and support one or two things there. But most times the only place to sit is the ground and cold or wet make that unappealing. There are almost never seats where I bird.

So this week I bought a Guerrilla Painter Thumbox, a small pochade box with a thumb hole on bottom to hold it in one hand. When you do this and open it up the cover becomes an easel for a 6x8 watercolor sheet, while the rest serves as a palette. In theory it should take the place of two or three hands.

I tried it out briefly at SCEE without much success before the woodcock walk. A couple of young visitors at my side recommending various additions to the painting didn't help but it was already ruined by the time I gave in to their suggestions. It was difficult not to take part in their enthusiasms. "Put in some red, mister!!"

One of the problems was that I didn't have a watercolor block that was 6x8 inches or even anything close. So I ended up cutting some Arches Cold Press #140 pound paper to fit. One thing I often find with this paper is that the paint seems to leap off the brush ending in an ungainly splash or splat on the page. I really don't like it and feel as though I have no control at all. 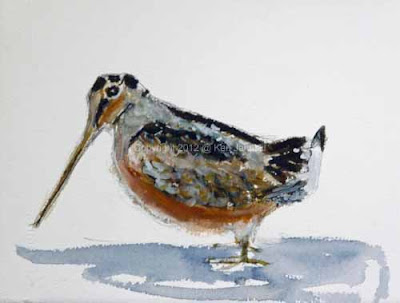 So when I decided yesterday to try to combine my woodcock sketch, photos from Magee Marsh and reference photos from guides into a watercolor I decided to use a sheet of that paper. I assumed I wouldn't be happy with it but it seemed smart to keep testing it until I got comfortable with it. Thus the next time I took the thumbox into the field I might be a bit more successful.

Well the splat and colors running into one another continued apace here. I tried to salvage something with white gouache but it's still pretty bad. Nonetheless it serves to illustrate both the woodcock and the new method of outdoor work.

And the whole post serves as an advertisement for Schuylkill Center for Environmental Education. It's not often you can see something so primordial in nature. Check the SCEE link above for the time of the next walk. It's a great opportunity. On our walk we were also treated to a full moon as we stood in the meadow waiting for the woodcock to appear. As I said much better than anything happening in Tweetville or Facebookland even without the woodcocks.
Posted by Ken Januski at 11:06 AM

What a wonderful sighting for you! I can no longer walk, but I'll let my brother in East Falls know he needs to scout about SCEE for woodcock.

I'm looking forward to hearing how you manage with the thumb box. It's funny as I am planning to get one for the same reasons, but decided to hold off until next month.

I was also interested to read how you feel about Arches paper. I hate it. All that skipping of brush and paint frustrates me. More and more I like Fabriano 140 CP better.

Your bird sketches, drawings, and paintings are all very fine. Even when you feel you've dropped the ball, there is something enjoyable and instructive. You've been motivating me to sketch birds more and more. It's great practice.

If you tell your brother about the walk next Tuesday and he can go then he'll know the best places to look. There's a slight chance I'll try again with my wife.

That's interesting that you to have problems with the Arches paper. I haven't tried Fabriano but I think I saw that they have a small paper or block that might be exactly what I need.

I tell you it's a whole lot easier to sketch outside than to paint. But I keep giving it a try, especially after admiring the work of others. Debbie Kaspari has a tiny kit that consists of an Altoids tin and a few colors. I think if you search the web you might be able to find her post on it.

The one thing I thought I'd like about this is the incorporation of an easel so that I don't have to have one hand holding the paper. I haven't liked it on my two attempts but I'm sure if will get easier with time.

Finally I couldn't he happier about motivating you to sketch birds more and more. My first attempts were horrible. But seeing the great examples of others kept me persevering. It was well worth it, both for the art and the thrill of drawing from life.

The one or two times I've ever seen a woodcock, it just looked so confused to me. Kind of like it was wondering how it ended up with such a bizarrely-shaped body.

Out here in the West we have the snipe, which is a little less reclusive than the woodcock; perhaps because it doesn't look so odd. I've been privileged to witness their courtship flights and that wonderfully eerie, other-worldly sound made by their tail feathers.

Ahh, sketching with an audience...not for the faint of heart! But sometimes the comments are just priceless.