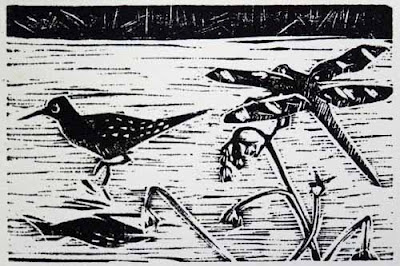 A few weeks ago I wrote a post about using sketchbooks as the source of more developed work. I showed a new watercolor sketch based on field sketches of Twelve-spotted Skimmers and Solitary Sandpipers both seen on the same day at Morris Arboretum last summer. The sketch was not complete or finished. But I thought it had a lot of possibilities as a more developed work.

So I started sketching the dragonfly and the dead flower that it had been sitting on. The flower had extravagant curves, in both flower and dead seed head, that were infatuating. So I wanted to get them in if I could. The trick was to get them in without having them dominate everything else. 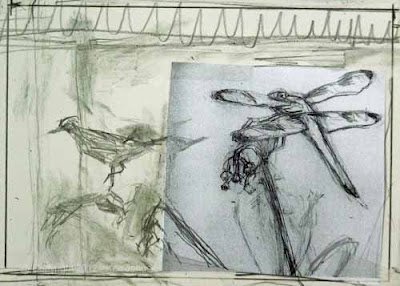 When I had a sketch I was happy with I scanned it and made some prints of it. I then pasted in into my sketchbook and drew in the rest of the sketch, as you can see above. Eventually I then scanned it, reversed it and copied in onto a small 4x6 inch linoleum block.

I've spent most of the day cutting this lino. After getting it to where I was fairly happy with it I switched to the paper I was going to print on, Rives Heavyweight, and the ink I planned to use, Caligo Safe Wash. Unfortunately the ink is too heavy and is covering up some detail, especially in the bird and dragonfly.

So the next step is to recut some of the more subtle lines and hope that the ink has thinned out a bit. After that I may do a bit more work on the far shore. But there's not much lino left. I've cut a lot away. So I'll be cautious, I hope, with any remainging changes.

As with the watercolor sketch I like the idea of combining two things that I saw in the same day in the same location, though not in this exact view. It's part of what makes art enjoyable.
Posted by Ken Januski at 4:04 PM