From Field to Print 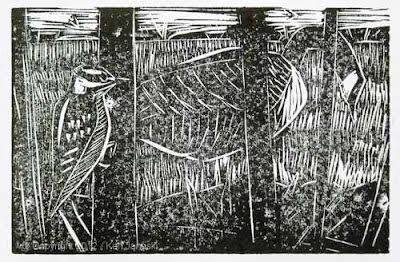 You might think that with a new baren, a new copy of Robert Gillmor's 'Cutting Away' and a stack of new printmaking paper all in the studio as of late 2011 that I'd be eager to get back to linocuts. Perhaps, but I just never could convince myself of a subject.

I have considered a couple subjects including the first version of the Solitary Sandpiper with the Twelve-spotted Skimmer but I just couldn't convince myself. 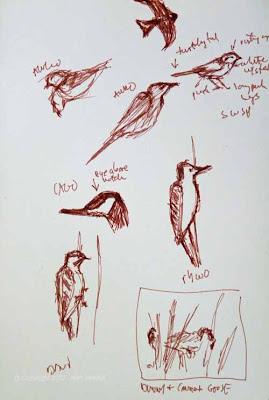 This Tuesday I spent over four hours wandering around the wetlands of Morris Arboretum. I kept hoping for first of year Kildeer or Eastern Phoebes. No such luck. Even the birds I did see weren't very close so I didn't get good field sketches either. I at least hoped to see again the first of year Swamp Sparrow that we'd seen on Sunday. They're a subtly beautiful bird.

While buried in a shaded scrubby area hoping for the Swmap Sparrow a Downy Woodpecker flew in. Soon a Canada Goose wandered by behind him, prospecting the sunny grass for food. At the bottom right of the field sketch above I hurriedly sketched a little thumbnail of the scene: Downy in shade, with big lumbering Canada Goose in the sunshine behind him. 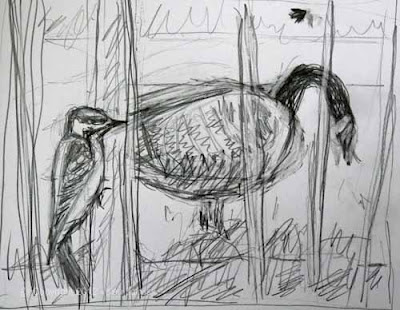 As I thought about doing a new print I liked the idea of developing this tiny sketch. That is what I did above. I also made some unsuccessful attempts to sketch the newly arrived Tree Swallows in flight. They didn't work out at all but nonetheless I decided to incorporate one in the sketch and two in the lino. They're so small and indecipherable that they may disappear from the lino before I'm done.

But for now they stay. This is about proof number 5 or 6 on the lino. The block is tiny at 4x6 inches. But sometimes smaller prints lead to greater freedom. I rarely like the appearance of a lino at this early stage. But I'm happy with this one. This is done with cheap ink on printer paper. Once it's more developed I'll turn good ink on some of that new printmaking paper. And the watercolor of the Swamp Saprrow, which I finally saw and photographed, will have to wait.
Posted by Ken Januski at 4:21 PM