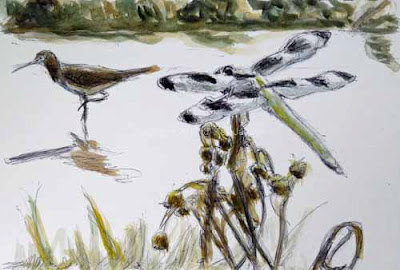 Most of the bird and wildlife artists that I most admire use their sketchbooks as the source of subjects for their work, not a collection of photos. Some use photos but only to check the details at times, never as the source of inspiration.

This makes sense to me. And yet it's far easier for me to start working on something by looking at a photo rather than by looking through my sketchbooks. There's just one problem. The work based strictly on photos always seems like an exercise. It may be educational and I may capture a likeness. But there's generally something missing when I look at it.

The problem with using my sketches as the source of artwork is that I really have to use my imagination. There is often too little in the sketches for my mind to make the leap from skimpy sketch to full-fledged idea for artwork.

But when I do I find that I'm able to call upon my imagination, to start putting together a scene based on various sketches. That's the case in the ballpoint pen sketch with dabs of watercolor above. 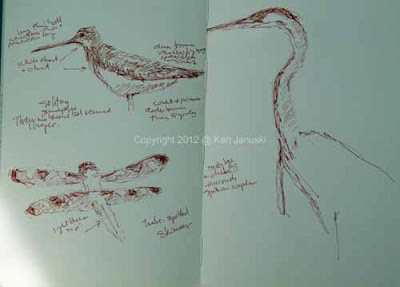 I've always liked the sketches I did last summer of Twelve-spotted Skimmers. In this case I also liked some of the photos I took of them on dead wildflowers. But the photos were never enough to engage my imagination. The sketches however, especially when combined with other wildlife seen that day, were enough to get me started.

I never saw this particular scene. But the bird and dragonfly were very close to each other, one in the water the other along side of it. So that was enough to make a plausible scene and that's what I've tried here. It's just a small 6x8 sketch. But it may lead to a larger painting or to more experiments with this subject.

And all thanks to a sketchbook full of field sketches.
Posted by Ken Januski at 1:34 PM