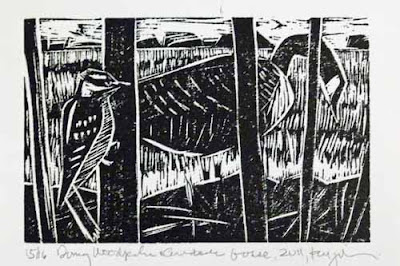 I don't hang out with printmakers. But I get the feeling that with some, just as in any other specialized field, there can be a real emphasis on technique. If you're making a living printing other people's prints this makes sense. Your customers might be very exacting. But when I look at books on printmaking my eyes often glaze over. They may be technically accomplished but they seem dull to me.

Of course printmaking really is the people's art in the sense that anyone can do it if they use a simple medium like linocut. So I often see prints that I like online. Amateur prints sometimes seem more direct.

In any case this is all to say that I don't have good printmaking technique. But as I've continued half-way through year number two of linocuts I'm beginning to feel more comfortable with some technique. Probably my biggest and most unpleasant surprise as a printmaker was the difficulty in getting a good, clean print when I printed an edition.

By that I mean one where the flat colors were fully inked, without any blooms of missing ink, and yet where lines of white stayed white and didn't fill up with the ink. Too much ink so that the flat areas were fully saturated and then the lines also filled in with ink. Or vice versa.

Then there was the struggle with pressure on the baren, the device used to put pressure on the paper that sat on top of the inked block. Too little pressure and the ink on print was too light. Too much and not only might the incised lines fill in with ink but the paper also might start being pulled apart, one little lint-filled piece at a time.

If I had my own press I wouldn't need to worry about the pressure applied on the baren. But I'd probably have other more complicated problems. So until I have a waiting list to buy my prints I'll stick with hand pressure using a baren.

I often expect the actual printing of an edition to be somewhat grueling. Will the combination of ink, paper and baren work correctly? Will I get a good edition of the size I'd hoped for? 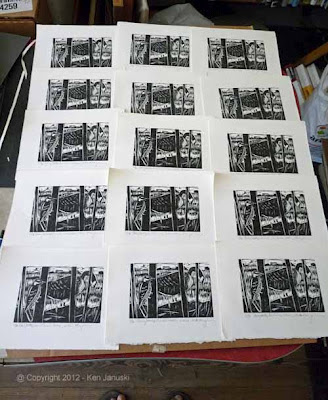 Above is most of the printed edition. I was quite happily surprised when this edition proved to run quite smoothly. I used a fairly new ink, which I haven't used much, Caligo Safe Wash Ink, an oil based ink that can be cleaned with soap and water. I also used a new paper: Rives Heavyweight. I've used Rives BFK in the past but it seems too think and unabsorbent for hand rubbed linos. I've also used Rives Lightweight but sometimes it seemed too light and apt to tear. (Well I'm afraid I was mistaken here. A few days after posting this I needed to organize some prints for a competition. As I did so I had to add the specifics for each. As I did so I realized that most of them were Rives Heavyweight! I'd only recently turned to Lightweight and had completely forgotten the many prints with Heavyweight). And finally I used a new Speedball baren that I received for Christmas rather than the bamboo barens I had been using. I'm not sure what the main factor was but they all worked together beautifully.

In the final analysis the most difficult part was signing them. First I forgot that it was 2012 not 2011. In printmaking an edition is usually labeled in the form of 1/12, meaning print 1 of an edition of 12. I knew that there was a problem when I went to write 13/12 today. Oops the edition was 16, not 12.
Posted by Ken Januski at 2:30 PM