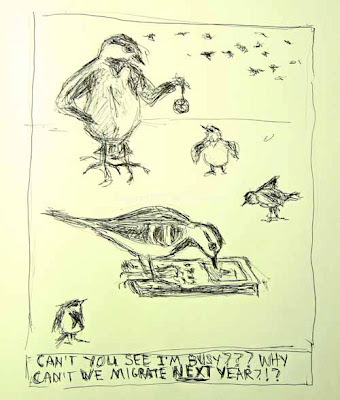 Not much to say here. I was talking to some beginning birders along the Wissahickon the other day and the woman mentioned how much better she'd gotten with identifying birds after buying a CD/DVD of bird songs. Her husband said why don't you just buy a smartphone instead? She said no thanks, and I agreed.

Later that got me thinking about the term smartphone. I know why they're called that but sometimes the end result seems to be to make people seem stupid.

So a cartoon regarding this has been rattling around in my head for about a day. I've never done one before. And maybe I never will again. You can blame the wonderful bird cartoons by Gene Holtan in 'The Ardent Birder' written by Todd Newberry for spurring me on toward doing one. I really need to reread this book. The cartoons themselves are charming, probably the best bird cartoons I've ever seen.
Posted by Ken Januski at 6:20 PM