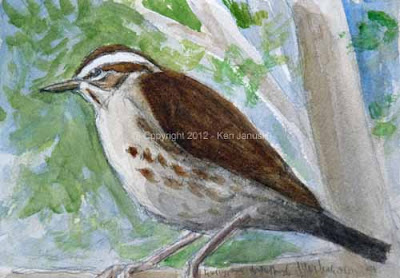 Not quite a year ago I published a post on developing a print of a Louisiana Waterthrush based on a field sketch and a subsequent watercolor. What really struck me was the long tail.

So I've been surprised when I've seen Louisiana Waterthrushes over the last couple of weeks and their tail doesn't seem quite as long. Unfortunately most have been high in trees, singing away, which is always a pleasure to see, but nonetheless difficult to draw. Even photos were difficult because they were too high.

The small watercolor above, 5x7 inches on Fabriano Artistico cold press paper, is based primarily on one of those photos. In it I've tried to be more accurate about the tail. I should add that I was about to toss this yesterday. But I think I've salvaged it.

The waterthrush still seems to be a slender, attenuated bird. But much of the length seems to come from the lower torso itself, not the tail. It seems there is always something new to learn! 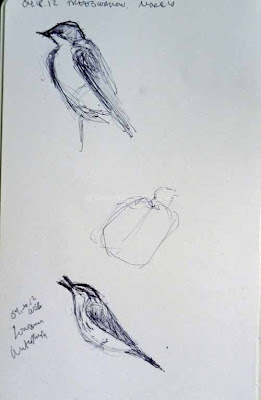 Above is the one field sketch I attempted of the bird. It is primarily based on a mental image of the bird after studying it with my binoculars. I did manage to show the shortish tail but didn't do well with the bill. At the top of the page sits a Tree Swallow, and in the middle, a rapidly, more or less, moving Snapping Turtle.

Until today the warblers that have been around are: Yellow-rumped, Pine, Palm and the Louisiana Waterthrush. Today that finally changed. We saw our first Black and White Warbler as well as our first Ovenbird. We also heard numerous Wood Thrushes though, surprisingly, we saw none. Our first Blue-headed Vireo also sang away but kept himself well hidden.

A 4-5 first of year day though means that true migration has finally arrived. Time to enjoy it before many of the birds are gone on their passage further north. 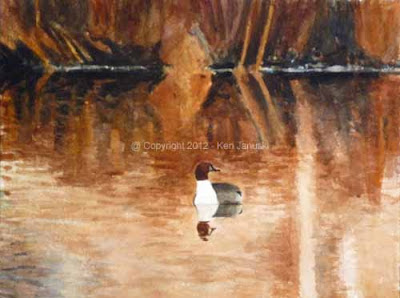 I made some very tiny tweaks to the Northern Pintail watercolor. More than that though I think this photo more accurately shows the orange color of the painting.
Posted by Ken Januski at 2:43 PM