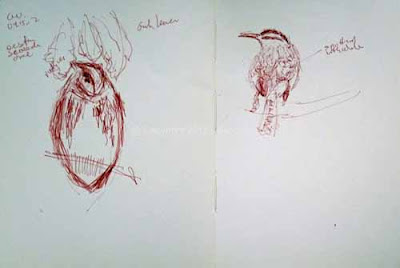 This post is I think more about the complexities of nature than anything else. If you spend enough time with it you're constantly surprised. The plot doesn't seem to grow old or hackneyed.

At top is a field sketch today that I made of a red phase Eastern Screech Owl and a Carolina Wren. With the wren I saw something I'd never seen before, all sorts of white spots on the scapulars or wing coverts. It was hard to tell which because the bird was all puffed up and I think had just taken a bath it a small stream at Morris Arboretum. I'm familiar with the barring on tail but these spots were on the top half of the bird when seen from the back. Some young birds have this sort of markings but I'd never noticed it before on Carolina Wrens.

When I got home I checked a couple of guides but I saw nothing to say that the very small white spots on the wing coverts of Carolina Wrens are more visible in young birds. So my guess is that they just seemed larger because the feathers were all separated due to the wren having been in the water and it was easier to see each spot.

With the Screech Owl the surprise was that the bird didn't move at all and yet the full frontal face that was there when I started sketching became more of a profile as the bird moves his head without any visible movement. So my drawing looks a bit, or more than a bit off. But it looks that way due to another of nature's surprises. 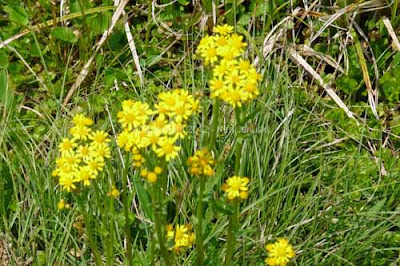 We birded two areas today, Carpenter's Woods and Morris Arboretum. So wouldn't you know that soon after I write about my favorite wildflower, and the fact that I associate it with Shenandoah National Park, we'd find it it two local locations?! The one at Carpenter's Woods was bigger, both in height, flower size and leaf size. But I think there's little doubt as to what it was. Later as we went to Morris Arboretum hoping to see some of the Wilson's Snipe that we've flushed on and off there over the last 10 days the first thing we saw instead were some Golden Ragwort that look almost identical to ours. A photo of part of the Morris patch is above. 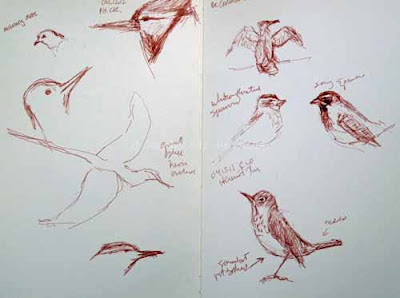 We rarely see snipe, only every couple years and rarely in Philadelphia. Part of that is that there aren't that many of the marshy areas that they like. There is Tinicum but since it's on the other end of the city from us we don't get there all that often. Before this year we'd seen them once at Morris.

But we've now seen them on three days over the last 10 days. Unfortunately unless you see them when they come out to feed at dusk you're most likely to see them as they flush after you accidentally scare them off.

What is surprising though, especially if they don't flush in profile so that you can see their long bill, is that your first impression is of a white rump. Jerene and I were both firmly convinced that we'd be able to positively ID the bird we saw 10 days ago because of the white rump. We also flushed it a second time and saw the long bill but I wanted to confirm the white rump. What a surprise to find there is none. In fact there's almost no white on a Wilson's Snipe. Could we have made a mistake? It seemed unlikely, especially as they always made the squawk that snipe make as they fly off. Then finally I realized that they do have a white belly. Each time they flushed in such a way that they banked away from us and showed us their belly. It was just about in the same place on their torso as their rump, just on the wrong side of the body! This has happened each time we've seen snipe recently. My guess is that it's a common practice of theirs.

Because they were always gone in an instant I couldn't begin to sketch them. I did make numerous other attempts over the last few days though. One of the most common migrants has been the Hermit Thrush. He's pictured in the lower right. They generally strike me as a bit pot-bellied, with their wings often pointed down, reaching below their torso. I've been sketching them each fall and spring for 4-5 years now and am finally getting a feel for them. Most of the other birds, including one of many migrating Great Blue Herons in flight, are less successful. But I was happy with the Double-crested Cormorant drying his wings at the Manayunk Canal yesterday.

It would be nice to have a sketchbook full of migrating warblers. But it's always nice to see any bird and get just a little bit better at portraying it in a field sketch. It is a long road! 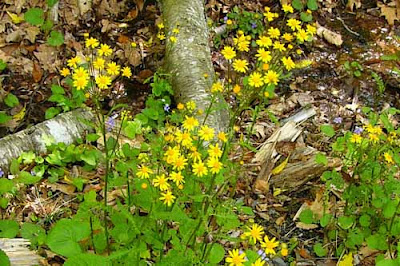 Over the last few days it's bothered me that I'm not able to show photos of Golden Ragwort with the deep burgundy stems that we see at Shenandoah. So I finally did a search on an old computer for some old photos. Here is one from 2004. Golden Ragwort in all its beauty. Oddly it is often called a wetland, or wet meadow plant. And it is. But it's also found in very dry areas. I believe that this photo shows one in a drier area though I may be wrong. It certainly is true that it also grows in some very dry, e.g. mountain ridge tops, places at Shenandoah. The coarser plant we saw at Carpenter's Woods was also in a dry location.
Posted by Ken Januski at 6:20 PM