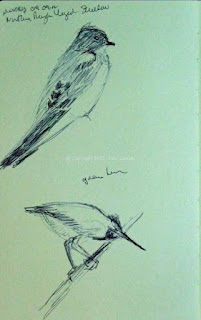 I didn't really expect to find an unusual flycatcher when I found the Olive-sided Flycatcher at Morris Arboretum a fe weeks ago. I was more on the lookout for warblers and shorebirds. In fact it was only when I got home and looked at the photos I'd taken that I realized that the bird was not the Kingbird that often is up there.
But yesterday was another story. Many people throughout Pennsylvania had been seeing migrating flycatchers, in particular Yellow-bellied. I don't there's anything particularly interesting about them other than their relative rarity here. I don't believe we've ever seen any except perhaps at Magee Marsh in Ohio a number of falls ago. Many warblers and other migrants have been seen in Philadelphia and its surroundings during the last week and yesterday's perfect weather made a trip to Morris Arboretum irresistible. 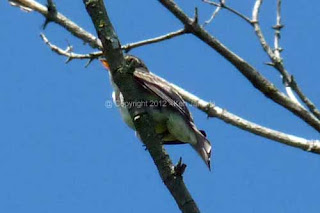 One of the first birds I saw was one member of the flycatcher family, the Eastern Phoebe. They weren't around Morris in summer but seem to me passing through in migration. Over the next four hours I saw a number of flycatchers. But they were quiet and mobile. There were no vocal clues as to their identity. I'm just about positive that one or two were Eastern Wood Pewees, a regular bird there.
But what was the bird with the golden orange bill? I hadn't really noticed the color of the bill on this flycatcher until I put my binoculars on it. When I did I was shocked by the brilliant color. It almost looked the the bright mouth interior of feeding young. But it was the bill. I'd never seen a flycatcher with a bill this color before. Of course light can play tricks with color. Still both my visual memory and the photo above show that bright orange color. In one view I didn't see an eyering but at other times I did and the photo above shows a bit of one. It is really a disappointing photo because it just shows a hint of both eyering and orangish lower mandible. Unfortunately the bird didn't stick around. Later in the day I saw another flycatcher with large eyering but it flew before I could put my binoculars on it and see anything more. 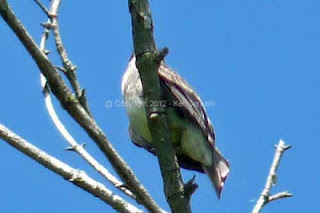 Above is the only other photo I could get of the bird. The eyering made me suspect a Yellow-bellied but I saw no yellow on the underside. So I left unsure of what I'd seen. When I got home I was happy to find this in Richard Crossleys's guidebook:

. That's not quite enough to confirm it as a Yellow-bellied but it does go a very long way!
As I said it was a perfect day yesterday. I was able to do the two field sketches at top, of a Northern Rough-winged Swallow and Green Heron, all the while debating whether I dare try to sketch the magnificent clouds. I was afraid I'd get nothing else done if I tried so I didn't. Dragonflies were also busy so I also took a number of photos of them. They're beautiful creatures and some day I'd like to do field sketches of them. But their quick movements and complex patterns have me sticking to photos for the time being. Last bird of the day was something I'd given up on seeing: a shorebird. The water seems to be too high 90% of the time this year for shorebirds at Morris. So when I saw this bird with an active tail on the path I suspected Northern Mockingbird, not shorebird. But I soon learned differently. It was a Solitary Sandpiper, picking in the tiny water depression in the path. Eventualy he noticed me and flew by, zigzagging all the way in typcial shorebird fashion.
Posted by Ken Januski at 12:38 PM