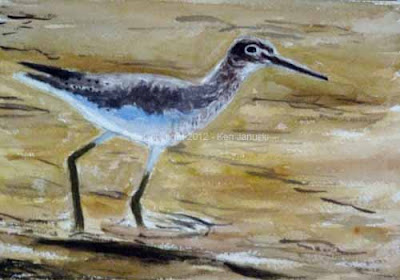 Kenn Kaufman had a great article in my print copy of the newest Bird Watcher's Digest. In it he talked about the 'secret' migration season, the one right now that no one pays any attention to. I'm not going to summarize it but just suggest that you read it yourself. A quick look at the web site didn't find it but if it's not there you can always subscribe or pick up a copy at newstands, assuming they still exist in this for-better-or-worse digital age.

The secret migration is something I've been talking about in some recent posts. It's what helps to get me out in what seems like an enervated time, the end of summer. There are probably many reasons not go  go birding now but for us we know that we may find shorebirds, warblers, flycatchers, hawks(like the osprey today) and who knows what else.

I was at Morris Arboretum mid-week and found three Solitary Sandpipers. One of them is above in a small 7x10 inch watercolor. I may do more with it but probably very little. As usual I don't want to mess it up. Of course by tomorrow fresh eyes may convince me that I just can't leave it as is.(Well a day later and I had to make a few tweaks. The new version has now replaced the old one at top.)

It can take me a long time to do artwork. I can think and plan it to death. Often it's better to just start and learn from what happens rather than trying to  plan perfection from the start. That's pretty  much what I did here. 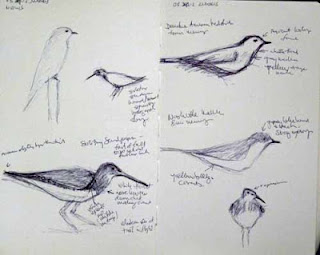 I spent a lot of time sketching three Solitary Sandpipers at Morris the other day.  Inevitably though  I realized that I got something wrong when I looked  at my collection of photos I've taken. The more detailed one above is pretty good but I finally decided I'd use a similar photo as the basis for this watercolor. It may not seem so but it really is informed by all the time I spent sketching these sandpipers earlier this week. Field sketching is as much  about looking and seeing as it is about getting something down on paper. There is a tremendous amount of learning that goes on. That learning continues when I eventually do a more developed work in the studio. In fact one reason to do more finished work is to try to consolidate, and perhaps remember, all that  I've learned. If  I'm happy with the results it's particularly satisfying.

Also on the pages above are a Northern Rough-winged Swallow, immature American Redstart and poorly remembered Nashville Warbler. Both the Redstart and the Nashville were drawn from memory 30-60 minutes after seeing them. This isn't the ideal way to do things but warblers move so quickly that  often when I see them I'll give up on sketching them because they're here and gone so quickly. Then in a quiet period later, especially if I happen to be sitting down, I'll decide to try  them anyway, just putting down what I remember. What I distinctly remembered about the Nashville were the bright yellow  belly and undertail coverts. What I  forgot was just how much of  the head and back is blue-gray. Much more of the head than I remembered it turns out.

So something gone awry with it but still a very fruitful time outside in the secret migration season and also later in the studio.