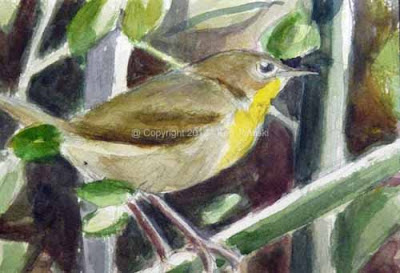 It's always a thrill to see a warbler in our small urban backyard. I believe that we've only seen one species over the many years we've lived here, this one, a Common Yellowthroat. Who know what it is that makes our yard attractive to them but not other migrating warblers? I really don't know but I never complain about them being here.

When Jerene yelled up to me that there was one in the backyard I grabbed my camera not my  skethbook as I ran downstairs. Generally I really try to sketch birds now rather  than photograph them. But I had the feeling he would only be here  momentarily, as they often are, and that I'd better make the best of my opportunity. I can get more of the general jizz of a bird when I sketch it than when I take a photo. But with momentary birds I rarely see details like bills, eyes, etc. So I  took six photos, all bad. They were  enough to be the basis for this small watercolor.

Speaking of momentary migrants I was reading the other day of some birders who  saw 15 Hudsonian Godwits land and then disappear three minutes later. That's the way things work. You have to be alert! You just never know what might make a momentary appearance.