Take Nothing for Granted 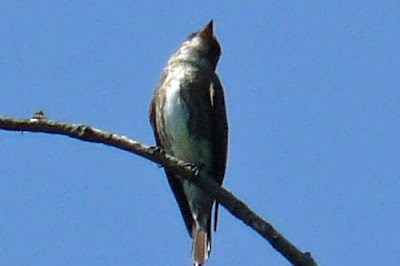 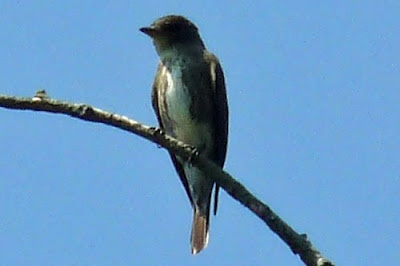 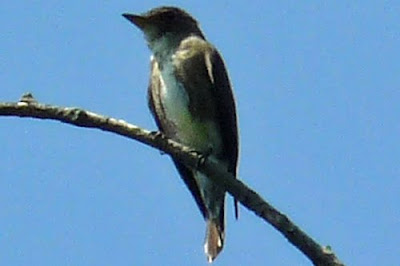 A good birder and close viewer might have noticed the slight vest on the Eastern Kingbird in my earlier post with fieldsketches from today. The bird I drew didn't have this vest. But the kingbirds that perch in this location also perch at the top of a 70-80' tree 50 yards away. They do it every year. So when I was about to leave and saw a kingbird like bird in that tree I assumed it was either the same or another Eastern Kingbird. BUT it had a vest. It also had, or seemed to have, some rust on the underside of its tail. I assumed the vest must be due to it being an immature Eastern Kingbird.
I don't see that many juveniles so I just quietly made the assumption. AND I added it to the sketch I'd done of the Eastern Kingbird earlier. I wanted to note it even though it was a different bird. I just didn't think it was a different species! After I'd been home awhile I got out some guides to check on the rusty tail. Well I didn't find it. But I did find the Olive-sided Flycatcher. I've seen these a number of times, often calling to help me out, but still distinctive with their vests. I don't know why I didn't think of it when I saw this bird. Most likely because I just don't expect to see them in Philadelphia and I do expect to see Eastern Kingbirds in Philadelphia and even on this exact tree.
In any case I'm posting some of the distant photos I took today to see if I can get a confirmation from the PA Rare Birds List that this is an Olive-sided Flycatcher. And to ask if anyone's ever seen a rusty undertail. (A few hours later and yes it is an Olive-sided Flycatcher thanks to a couple of responses from the list. I've also retitled this post in case my sense of humor in the previous title just passed people by, as it often does....................)
Posted by Ken Januski at 5:20 PM