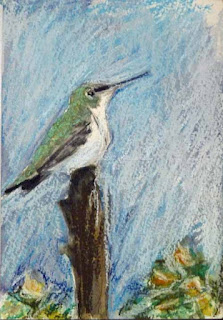 I have another blog, the black sheep in my digital family, in which I try to keep track of what birds feed on Devil's Walkingstick, also known as Hercules' Club. I really can't count this Ruby-throated Hummingbird but he was perched atop a dead walkingstick stalk, about eight feet off the ground. Occasionally he dropped down to feed at the jewelweed right in front of me, getting so close that the hum of his wings was almost loud.
;
I've been reading about dragonflies and damselflies this summer and how they patrol and protect territories. I wonder if this hummingbird was doing the same, keeping a high lookout for any interlopers into his jewelweed patch.

I was interested to read today at The National Zoo that young hummingbirds find that this is coming into bloom just when they need it in late summer. I've actually seen it in bloom for awhile now but still he looked like the patch was his and his alone. 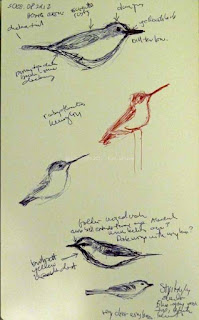 I did the watercolor and pastel at top based on the field sketch I did of it today (along with a very bad House Wren, a beautiful Blue-winged Warbler, and an unidentified warbler). I also shot a few photos and decided when I got home to do s quick small watercolor of the hummingbird perched on the Devil's Walkingstick to illustrate a new post It was a good idea but a disaster in practice, turning into a muddy, overworked mess.

Part of the reason for this is that I bought a very small watercolor pad with the intention of using it in the field. I almost never do, instead using it at home when I just want to whip out something small and quick. And it may work for that. But as soon as I add much water to it the paper buckles and the colors run. Instant mud. I normally just abandon it.

I don't normally try  to salvage it by adding another medium. When I started as an abstract artist I loved mixing media. Nothing should get in the way  of the final result. But now I'm much more of a purist. I want my  watercolors to be watercolors and not mixed media

But today I finally gave in and tried to brighten this  up with pastel.The underlying drawing, based mainly on my field sketches above, was good. I hated to waste it on a muddy watercolor. So out came the pastels. Now it's almost entirely pastel. The watercolor is almost completely covered. But it does look much, much better. 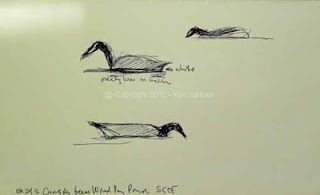 The high point of today was a very close,  but very brief look at the stunning Blue-winged Warbler. I did a sketch from memory above that doesn't begin to do it justice. Later as I sat on a bench in front of Wind Dance Pond at Schuylkill Center for Environmental Education I sketched these Canada Geese, at first in front of me and then on the far side of the pond by the time I was done. One of the beauties of field sketching is that even the most common birds can be fun and rewarding to sketch. That is something that birding itself can lack. For many there's always the tension of needing to find something new, rare or beautiful I'm also that way. But because I sketch almost any  bird can be rewarding and interesting to  see.


And speaking of  dragonflies and damselflies doesn't 'Jewelweed Sentinel' sound like an as yet undiscovered species?

"Jewelweed Sentinel" is just a great all-around title. I am envious! I struggle with coming up with painting titles - mine always seem either too impersonal or too cutesy.

I know that rufous hummingbird females will guard hummingbird feeders and only allow their offspring (and often just the female offspring) to feed there so it certainly would stand to reason that this hummer was guarding the jewelweed. Incidentally, jewelweed is one of my all-time favorite plants. From the seed pods popping on contact to its anti-itch qualities - everything about it is just so cool!

I love your watercolor mud fix of adding the pastel. It looks great - one would never know there had been a problem.

Nice to hear from you! I always enjoy a good title and like you I'm happy with this one. Every once in a while the stara align and a good one pops up.

I've heard, and occasionally seen, how aggressive hummngbirds can be. At this time of year most of our hummingbirds are migrating but I guess that even then he might have been protecting his food source.

I only slowly picked up on the use of pastels to touch up watercolors in some artists I admire. Of course they just touched up. I completely redid mine! I remember seeing a Degas at the Art Institute of Chicago many years ago. I went often and saw it frequently. What was striking is that he'd added some paper to his original paper. So early on I learned that even the best artists made mistakes and weren't shy about improvising in order to work around them.