To Sit and To Sketch - A Miracle! 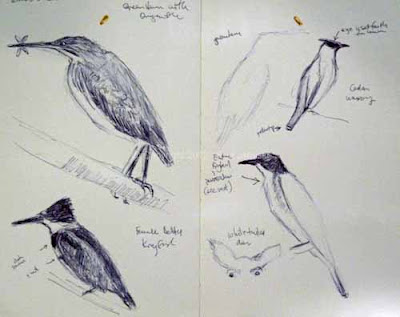 I wonder if anyone has ever noticed the shakiness and uncertainty of the lines in my field sketching? Part of this is just due to tentativeness about which line to put down. But most of it is due to the fact that I never have a firm support underneath my sketch pad. At most I sit down once out of every 50 field sketches. More likely it's once out of 100.
Most of the time, even if I'm using a scope, I'm holding the sketchbook in my left hand and drawing with my right as I stand. That means that there's never a firm surface underneath the sketchbook. Today I had the rare pleasure of sitting cross-legged on a bench, my scope lowered to my new height. I was able to rest my sketchbook on my crossed legs as I sketched. It seemed like some sort of miracle of luxury!
I actually stood for the Green Heron but he stayed still for at least five minutes and I was able to get continued good looks at him. The other birds, Belted Kingfisher, Cedar Waxwing and Eastern Kingbird came and went, the latter two often off on a quick flycatching foray. But they almost always came back to the same or a nearby spot. So at times each of them looked pretty empty. But as they came back I was able to go back to the sketch and add more detail.
Talk about small pleasures!! The eyes peaking out at the bottom right are a White-tailed Deer who kept his distance. He moved a couple of times, the last taking him completely out of view. Too bad as I would have liked to at least completed the head.
These birds are typical birds of Morris Arboretum at this time of year. I'd like to see something more unusual, in the rail, shorebird or warbler family perhaps. But when I'm able to sit down and comfortably draw I can't complain. It was an exceedingly rare opportunity.
Posted by Ken Januski at 3:37 PM