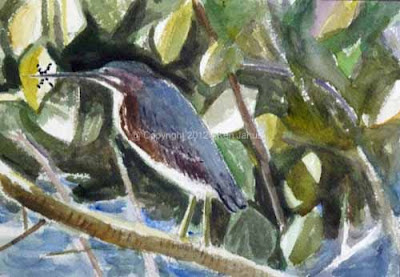 My last few trips to Morris Arboretum have turned up Green Herons among other migrating birds. I've done numerous field sketches and one of them showed the heron with a dragonfly in his mouth. Twelve-spotted Skimmers have been the most plentiful dragonflies recently so I assumed that's what he'd gotten. They're also so boldly patterned that there's the slim possibility that they could be identified at the small size they'd need to take in a painting of the heron itself. So here's one of my few recent attempts at watercolor.

The complex color and wing patterns of Green Herons make them difficult to paint. I have no interest in putting each little mark of the complex pattern. But doing a impressionistic version of them has never worked well for me either. This is one more attempt at a shorthand verson. Though I have numerous photos this is based, except for foliage, entirely on the sketch itself. I used the photos for some vague idea of foliage and then improvised from there. This also seems to be an eternal process -- getting some sense of foliage, and feathers, without detailing every single one. I have to admire anyone who can do so

I should also mention, in case you haven't noticed, that I'm a real theorizer when it comes to art. I try to think through what I'm doing. But that only  goes so far. At times you just need to start painting, hope for the best, and learn from what happens. That's what I did here though only time will tell if I've learned anything. Part way through this painting I was about to abandon this as an abysmal failure, a stiff bird with a non-existent background. But it paid to keep working and try to get a background that was believable and also worked with the heron. This reminds me of watching a baseball game last night where the commentators said that the pitcher,  who'd been having a rough time recently,  should have gained some confidence from last night's successful outing. The same is true with painting. If you have a more or less successful outing you  gain in confidence. But this can never happen if you don't actually go out and take a chance on a painting, knowing when you  do that it might end up an abysmal failure. I confess that though I always know this is a possibility I was shocked at how bad this looked at one point along the way!
Posted by Ken Januski at 6:26 PM