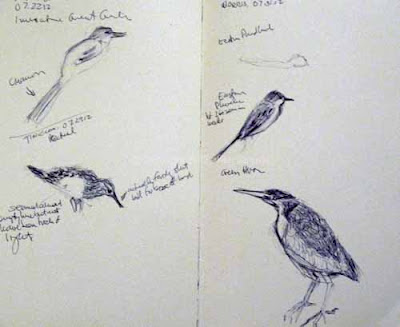 It always seems that the heat and humidity of July limit the time I spend outside and consequently the time I spend field sketching. But a few cooler days over the last week or so have prompted me to get out a bit more often. Above at top left is a young Great Crested Flycatcher seen at Morris Arboretum about a week ago.
Below it is a Pectoral Sandpiper, seen last Sunday at Tinicum, along with many, many Semipalmated and Least Sandpipers. It was shocking to see so many, some of them right at our feet below the boardwalk that crosses the main impoundment. As I sketched this I deliberately left the large white area on breast. And yet when I looked at the photos I took and guide books it doesn't really show up. My guess is that it was just lighter, which is likely, and I overcompensated. I did want to accentuate the dark breast markings as well as the flight feathers toward the back. When I see such a flock of birds I'm always disappointed that I don't have a full day to just sit and sketch them. Unfortunately Tinicum is about 30 minutes away where as Morris, a very small wetland, is only five to ten minutes away. So I often end up at Morris where there's never such a plethora of shorebirds.
And Morris rarely disappoints. After all it is an arboretum. So there are always interesting trees and shrubs. The wetlands area is primarily native vegetation. Usually it's quite easy to get close looks at Great Blue and Green Herons, Belted Kingishers, Wood Ducks and numerous other local birds. We haven't seen many Eastern Phoebes since late spring. On the right page above is the first one we've seen this summer, at Morris yesterday. Green Herons have been quite visible the last week or so and the one above is also from Morris. 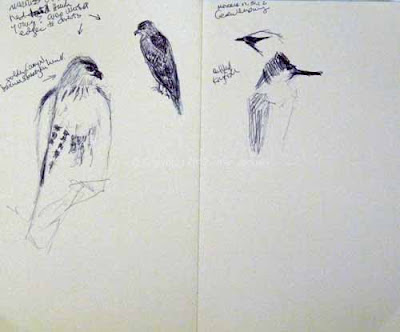 There was also a very vocal young Red-tailed Hawk and I was able to do a couple of sketches of him. Unfortunately he changed his position as I was about half-way through the larger drawing. That explains the darker areas on head. I tried to guess what it looked like and then tried to rectify my mistakes with more ballpoint pen marks. It's a basic maxim of field sketching that you should only put down what you see. But sometimes it's hard to follow that maxim; there's always a desire to make the sketch look more finished. Other birds keeping their poses for only a short time were a Cedar Waxwing, seen at top left and a female Belted Kingfisher below. One of the odder sights was the kingfisher attacking the hawk numerous times. 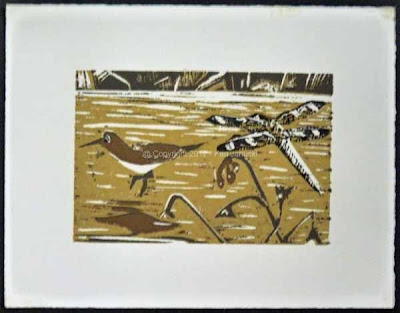 There is nothing particularly good about these sketches, though that of course depends upon your perspective. Compared to what I started with three years ago they're magnificent. Compared to some of the truly amazing artists of the Wildlife Art thread at birdforum they're still the work of a beginner. Irregardless I do enjoy them now and have for the last couple of years. I know that at least partially they've captured what I've seen. They always seem nutritious as I think most honest field sketches do.
I'm not so sure about the finished version of the reduction linocut of Twelve-spotted Skimmer and Solidary Sandpiper. I won't go into all the technical problems but I think it's evident that it's just not a very clean print. There's a bit of muddiness in execution. I'm surprised that this doesn't happen more often with the complex method of reduction linocut. In some ways this is my most unsuccessful, at least in my own eyes. Still I do love the composition and think the print is not a complete failure. But I also know I had plans for something much more successful. So this one doesn't seem quite as nutritious as those field sketches. Not all progress in any field is constantly smooth though. This may be the necessary next step in reduction linos for me. Perhaps the hext one will be much easier and much more successful. As always this is much informed by my field sketching, even if it looks like I've been very sloppy or don't really know the creatures portrayed.
Posted by Ken Januski at 12:58 PM