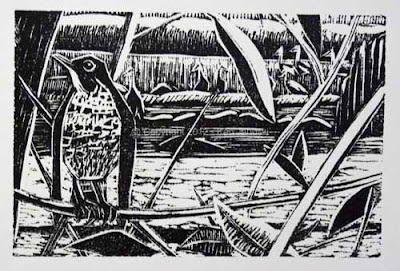 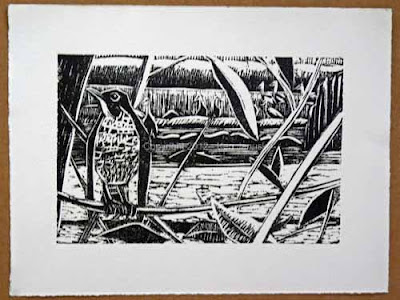 It seems like four or five years ago that we were treated to the sight of many Sandhill Cranes around Horicon Marsh in Wisconsin. I was shocked to realize it was only three years ago. In any case I and my wife were both thrilled to see the birds. I wanted to portray them, based on some very bad field sketches that I had made as well as some photographs that I took. But I wasn't interested in portraying them in one of their typical poses.
While we were there we also happened to see a Hermit Thrush sitting in a tangle near one of the ditches that run through the marsh. There were no cranes on the other side. But if I turned 90 degrees to the left and moved up a few hundred yards there were. So I put them both into one composition and made a charcoal and pastel drawing of that three years ago.
I've found that often my best linocuts are ones based on the design of some earlier art work that I've made. I've always wanted to pursue the thrush and cranes so I finally did so, starting about a month ago. Unlike the skimmer and sandpiper lino which has given me constant grief this one has been easy. The only hard part was letting it sit for a week or two while I made the final decision on minor tweaks to finish it up. I finally did that today.
This is an edition of 18 hand-pulled prints, i.e. no press to help me out. I used Gamblin Portland Intense Black in on Rives Lightweight printing paper. The image is 6x9 inches and the full print is 9x12 inches. It's been a treat to have such smooth sailing on this one.
Some of you may be familiar with Sandhill Cranes. When you first see them there is a sense of touching something primordial, something from not just another time, but another geological epoch. Given this it's been very hard to understand the desire of many states to allow Sandhill Crane hunting. My first reaction on hearing about this was that it was just ignorant bloodlust. But when we saw them they often were in farmer's fields. Were they possibly doing any damage? I don't really know. But a quick search before posting this indicated that Wisconsin itself, where we saw these birds, is considering a hunting season. The rationale according to one source is that there has been a boom of cranes and that they are wiping out corn crops, devouring the seed as soon as it is planted. If that's the case then it is not a foolish and ignorant bloodlust, kllling everything in site for 'sport.'
It's been a long day so I didn't have time to pursue it. Julie Zickefoose has written extensively on Sandhill Crane hunting in various states. I hope that the hunt is disallowed in Wisconsin but if not I hope at least it is a very short season and allowed for only the best intentions. Anyone who has seen these birds will know why I say this. They remind me that we are part of a larger, more complex, and far older world than most of us ever even consider. All too often, probably throughout history in fact, there has been a battle between those who see the bigger picture of the world we live in and those who see it only as a source of immediate personal profit.
Posted by Ken Januski at 5:51 PM

Hi Ken, Your linocuts always attract my attention. They seem like so much careful work, you must be always pleased to see the final outcome. Of hunting, I am of two minds. As a biologist I see benefits to hunting and if done to provide food for the table it seems like a worthy pursuit. The trophy hunting and the photos of hunters posing with their prey I do not like, especially when they are grinning about the size of their take. Hunting is such an economic commodity that it is hard to manage for the more noble purposes and to know when it is right and when it is just sport. Thanks for broaching the topic. Ellen

Nice to hear from you. The funny thing about linos and me is that I'm not a careful type of person. at least not in my art. Maybe they force me to do more planning than is normal for me? Who knows? But I do enjoy them.

I've never been a hunter myself though I have spent many years fishing. But there are often complex topics that I think need to be broached, whether peoople like it or not. And hunting sandhill cranes is certainly one. I absolutely hate the idea of killing such birds. They remind me that we are part of a much bigger and far more interesting world than that of tweets and Facebook 'likes' and 'friends.' On the other hand I have sympathy with people trying to make a living, especially those who do try to make it from the land, like farmers. So if it's true that the destruction of their crops and livelihood is the reason for the hunts then I'll at least listen to their reasoning. But you never know at all. Yhis could just be a cover. What bothers me most about hunting, and fishing too, is when it is just a sort of mindless activity, where the hunter doesn't have the slightest respect or consideration for what he hunts. It's just an object to destroy. Then it doesn't seem much different than my grade school classmates who liked to destroy things as some children will do.

I just read an essay on 'capitalism' yesterday in the Wall Street Journal. What is good and bad about it, how necessary and valuable are 'job creators', what responsibility do they and government have to society, etc. Many of those questions were raised and answered from a mainly business perspective, not one that I necessarily agree with. It's really the right time to be asking such questions. But I'm afraid that it's just too much to take on in this blog, and would generate far more heat than light, as they say. Still I think these are the type of questions that it would do society good to ask.

As usual I'm really aprreciative of anyone who listens to me on such topics. I know many people would prefer not to think about them.