And What of Lino? 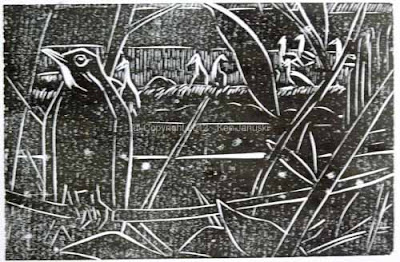 It's been quite awhile since I've done any linoleum block prints. This is odd because it's a way I like to work and my prints are relatively popular, at least in terms of comments I receive. I think one reason is that for me linos require more planning than the other media I use: acrylic, pastel, charcoal and even watercolor. Once you carve away part of the linoleum block it's gone for good. So it seems smarter to have at least some rough guidelines before starting.
There are a number of other reasons that I won't go into here. Suffice it to say that generally speaking I think my best linos have been ones that are based on other work I've done in other media. Transposing something I've already done seems to work well for some reason
So after hemming and hawing for months on what to do next I finally decided that the newest lino would be based on an old pastel of a Hermit Thrush and Sandhill Crane in the background. At the top is the second stage of this, printed with cheap ink on copier paper. 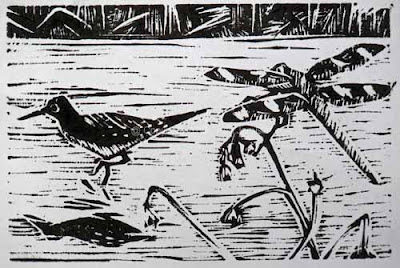 Since it's been so long since I've done any linos I was surprised to find the block for the Twelve-spotted Skimmer and Solitary Sandpiper in my printing and proofing area. THAT was a disappointment, the finished print I mean. I seem to lose all detail when I changed inks going from proof to edition. I then cut deeper to make up for it, before I realized that the problem might be the ink itself. I finished the edition but told myself that sometime in the future I should go back to the block with different ink and try a proof. That's what I did today with some leftover ink. The results remind me of how much I like this idea. I think that once I finish the Hermit Thrush/Sandhill Crane lino I'll return to this. I still think there's something great waiting here.
It supposed to be 100 degrees or more later today. I do all my proofing and printing in our very cool basement. Do you think that had anything to do with my decision to finally return to lino? I don't think so but it is compelling evidence!
Posted by Ken Januski at 2:38 PM