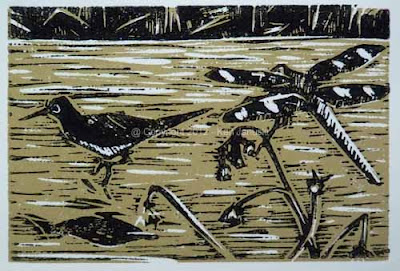 One of the methods I've never before used in my linocuts is that of multiple linoleum blocks. You print one or more colors on one block and then one or more colors on another block. As usual the biggest problem is registration, so that what you print on one block matches up with what will be printed from the other block.
I'm not sure if doing a reduction linocut as I've done on my other multi-colored linos is easier or more difficult. In them you keep carving into the same block. But each time you print a new color you have to make sure that you place the paper you've already printed earlier colors on onto the block so that it registers. This was not an easy job with my 9-color Blackburnian Warbler lino. What made it possible for me, without my head exploding, is that I've never been finicky. A slight lack of registration gives me a bit of dissonance that I think I prefer in my own art.
For some reason such dissonance seems more modern. I'm not sure if that's true or not. And it's quite a comment if it does. Still it does strike me as true. In any case in the lino at top I've tried to revive my old lino of the Twelve-spotted Skimmer and Solitary Sandpiper from late last year. This is a proof at top but I do like it. In particular I like how the striking black and white spots of the dragonfly show up strongly. I'm still deciding whether or not to add a second color to one of the blocks using reduction. If I do so it will be a brown that more accurately reflects the color of the sandpiper. But I may decide to just leave is as is. I don't want to lose the strong contrast that I have right now. 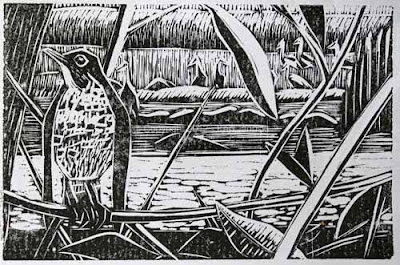 Though I've wanted to do more with this subject for quite a while I was prompted to do so now because I needed to keep my mitts off the lino above. It's nearly done. But when I'm not sure what to do next it's very tempting to just do something and see what happens. That's the odd thing about art. I don't believe you can really ever THINK something through. It's always a combination of thought and action. But too much action, especially with media like lino and watercolor, that punish you for overwork can also be very dangerous.
So to force myself to leave it alone and glance at it occasionally I've started on this new lino. Only time will tell how much more work will be done on it. Eventually I'll need to print both of these linos on good paper.
I think it was at least three years ago and probably a few more that I started an online store to sell my work. That link is listed on the upper right as 'For Sale.' But I've never been too happy with it. It's expensive, has teeny, tiny images in the various templates that it offers and has very bad analytics, so that it's hard to know who is coming to the store, where they come from, why they might put an item in their cart and then not checkout.
So about a year and a half ago when I took up printmaking again for the first time in many years I opened an online store on etsy that was mainly for prints. Since they were lower priced and etsy, at least from what I can tell, is also geared to lower prices this made sense. But as I've gotten more and more unhappy with my main online store I've added more work to etsy. I'm now at the point where I'm seriously thinking about just dropping the other store. Etsy has its own problems. Who knows how anyone can ever find anything there. There is just so much STUFF!! But it also has tools like Etsy Mini, the little grid of images of my own items that is at upper right of this blog. I like this and my guess is that it sends a number of viewers to my etsy store.
I don't think too many people who read this blog frequent my online store. But in case you do this will explain what happened if you no longer see it in a few weeks.