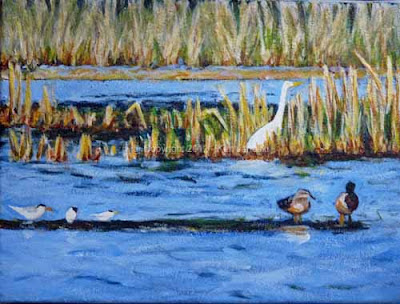 When I go birding, especially in a place like Cape May, NJ, where unusual birds are very possible, my goals are to see new birds and to see them well enough to sketch them. That's not to say that in places like Cape May I and my wife don't enjoy just being out in the environment. We do. Much of our birding, whether here or away, is in beautiful places.
We had hoped to see the endangered, and protected, Least Tern during our visit in late April/early May. Through the last day of our trip we still hadn't seen one.But as walked 'The Meadows' on our last night there we saw a smaller tern out on a spit. Sure enough we could see just enough to identify it as a Least Tern.
It was just too far away, even in my scope, to sketch. Instead I took some photos and hoped for the best. They still showed almost nothing to indicate it was a Least Tern. But it did show how small it was compared to the Forster's Terns to its left. And it showed one of the most striking aspects of this area, the bands of water and reed.
I always enjoy this view. It is so indicative of Cape May. I also liked the fact that the photo showed various birds all together in the same environment. This is what you actually see when you're outside, not individual birds, posed as though in a photographer's studio. As much as I like to show the beauty of birds I like to do it with them in a recognizable environment, not in the equivalent of a photographers studio.
This is on a 9x12 inch canvas. I'm not sure how much more I'll work on it. I have gone back and forth on the two bands of reeds four or five times. At some point all of the shapes, colors and sense of light will look good to me, or at least as good as I think I'm capable of doing. The birds will remain loosely defined. But that is the way that they really are at that distance. I do like the fact that this looks pretty much just like what you might see at 'The Meadows' in late spring.
Posted by Ken Januski at 1:22 PM