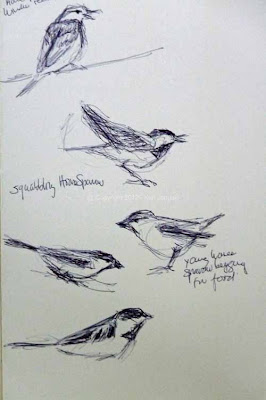 It's easy to be a bit manic as an artist. There are so many interesting parts of art it's hard to know which to focus on. And it's easy to be seduced by one then the other so that you seem to move about erratically with no clear sense of direction.
In some ways it may be similar to a cook who has a mental encyclopedia of all the various enjoyable tastes and combinations of tastes that are available to him. But you can't use them all at once! My guess is that the secret of any successful artistic/creative endeavor is to learn to focus on one thing and sublimate others.
I had to think of this when sketching the House Sparrows that are at a window feeder outside my studio. They were particularly raucous today with at least 15 of them fighting for the space for three that the feeder allows. Some sketches of them are at top. 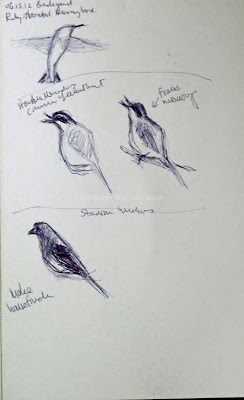 Seeing sketches that capture a sense of liveliness and animation reminds me of how much I love this in art. At times I can value it over everything else. I've never studied animation or cartoons but this type of sketch veers toward a cartoon. This could sound bad, something lower on the cultural hierarchy than more ambituous, finished art. But I doubt it's true. There probably is a reason that both cartoons and animation are so popular. They strike a fundamental human chord.
Among the other attributes of art I love are an orchestration of order, of color, tone, composition. This is almost the opposite of the spontaneity of field sketches. Soon I'm sure that desire for orchestrated order will come to the forefront again. But for now I'm happy to be trying to capture the sense of animation of the birds I see. Above is a Ruby-throated Hummingbird that has been frequenting our monarda. Below him two versions of a singing Common Yellowthroat. At bottom a House Finch also from the studio feeder. 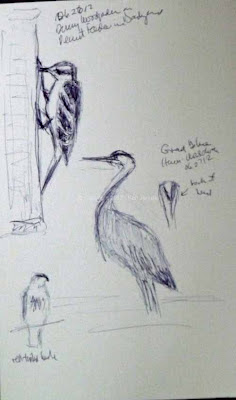 Outside our kitchen a small and young Downy Woodpecker has been frequenting our various feeders. That is him above along with a Great Blue Heron at the Wissahickon striking a particularly elegant pose. Real-life poses that are caught on paper rank high in my pantheon of desirable artistic qualities. Also a far-off Red-tailed Hawk. 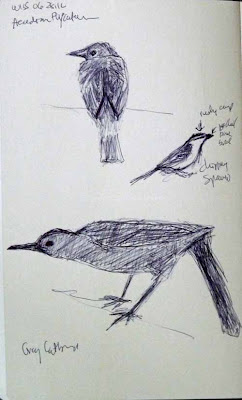 And finally the ubiquitous squawker of the summer, a Gray Catbird. They're so easy to ignore, especially as they mimic the sounds of other birds and can make a birder think the bird is far more unusual than it really is. But they're also very animated birds. I've tried to capture some of that here. To me this is far more exciting than putting down every little feather of the greater coverts and having it look dead as a doornail. With him is a back view of an Acadian Flycatcher. This is another ubiquitous bird of the Wissahickon and one I'd really like to master before the year is out.
Posted by Ken Januski at 10:19 AM