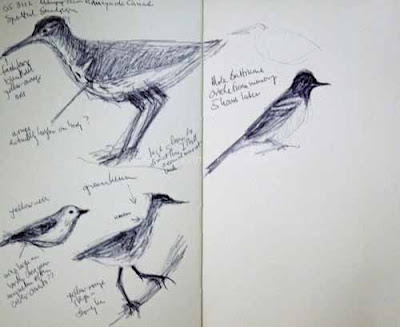 With the weather back down to the 70s from the mid-80s it's the perfect time to be outside. So I and my wife couldn't resist checking out some of our local birding spots, most within a mile of our home. The proximity and variety of good birding areas is always somewhat shocking to me given that we live in Philadelphia, one of the largest cities in the U.S.
In any case yesterday we walked along the Manayunk Canal, just down the hill from where we live. The biggest surprise were two Spotted Sandpipers, one of which is at top of sketch above. Though Green Herons are common here I think the one pictured above is the first we've seen in Philadelphia this year. Yellow Warblers as well as Baltimore Orioles are both common at the canal. But the striking yellow of one, and orange and black of the other are always a great pleasure to see, exhibiting the celebratory colors of summer.
As you can imagine, and as I've written over the years, I always want to portray some of that beauty and my reaction to it. I used to feel I needed the camera to capture this, and then I could get some faint semblance in art based on the photo. But now I'm much more likely to draw what I see even when the bird is long gone. That's what I've done above. I'm getting much more to trust myself, so will spend a short time looking at bird, then try to sketch it, often not looking up for a minute or two. If the bird is still there then great, I can confirm what I've put down and try to refine it. But if not at least I've gotten something. At home I'll compare it to photos I have.
The most surprising thing about these sketches is that I didn't do the Baltimore Oriole until I got home. The page looked empty, I'd wanted to sketch one of the orioles we'd seen but didn't have time, even though I had noted certain aspects of it that I often seem to get wrong in drawing it. In any case I added this sketch about 5 hours after seeing the bird.
I'm sure that this can be overdone, relying too much on generalizations and not enough on actual looking. But I've always had the opposite problem, looking too much and only getting an unrecognizable line or two down. On top of that I never had a general impression of the bird which could help me flesh out the sketch. So I'm happy with my growing ability to generalize. My guess is that all talented field sketchers use a combination of both methods. 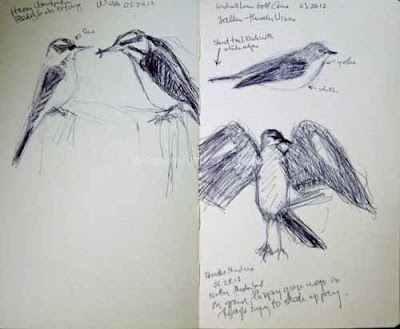 I've shown the left hand side of the pages above previously. But I liked all the bird activity shown when I included the left side so I've shown the full two page spread. On left a male Hairy Woodpecker feeding a grub to a youngster. On the right a Yellow-throated Vireo at top. This is a bird we rarely seen and one I hope will remain here to breed. It just calls out to be painted with its yellow throat and spectacles, and white belly but I'm not going to touch the sketch. Perhaps I'll do another based on this that I can then add color to.
Below the vireo is the star of the show, a Northern Mockingbird seen at Houston Meadows. He exhibited behavior I've never seen before, jumping forward on the ground and flashing open his wings. It was fascinating to see and I assume was meant to scare up prey. When we got home I found a number of photos of such behavior in my various guides. One showed something I'd missed here: a real lunge forward with one leg much in front of the other and the torso more horizontal than vertical. It makes me want to get back to the meadows and see if I can study this behavior more. It just calls out for a painting or print.
Almost all of these birds are local breeders, the only possible exception being the Yellow-throated Vireo and Spotted Sandpipers. But as I said in a previous post June and breeding season can be a fascinating time. Most of the migrants have now gone through and only the summer residents remain. But they're a pleasure to see and to portray.
Posted by Ken Januski at 8:50 AM