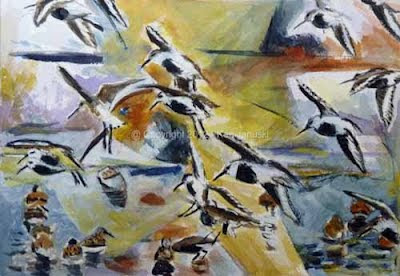 A few posts back I showed a small experimental watercolor of a number of shorebirds, almost all of them Dunlin, landing. It was an idea for an entry in the Bike Art show at Manayunk Roxborough Art Center. My thought was that the sense of dynamism was similar to that of a bike race, especially going up the Manayunk Wall and also at the sprint to the finish line. Limbs and wheels are flying everywhere just like the Dunlin wings, bills, legs.
Though I liked the watercolor I wanted to try another one that was a bit larger and more developed. It is at top of post. It's about 9x12 on 140# Arches cold press paper in watercolor and white gouache.
Some viewers will I think appreciate this, some will think it's a valid idea that just didn't get executed well, and some will wonder why I waste my talents with naturalistic art doing something like this. It's mainly for the last group that I'm writing this. 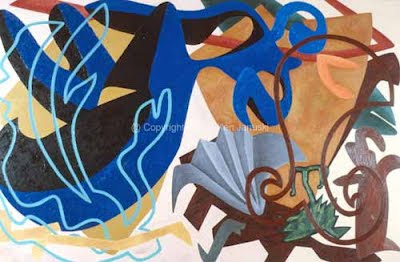 Above is an abstract oil painting that I sold to the Philadelphia Stock Exchange, now part of NASDAQ, a little less than 10 years ago. It's representative of most of the artwork I've done in my life, before I turned from abstraction to naturalism. I don't want to write a treatise on it but will just mention Matisse's quote about a painting being an orchestration of elements with everything in the right place. I always liken my abstract art to music. It is an orchestration of color, shape, texture, composition space that all adds up to something expressive, just like music.
When I turned to naturalism it was difficult to leave all that power of expression behind. Of course I gained something instead, the ability to portray nature, and thus gain all the expressiveness of nature. I'm happy I went in that direction. But sometimes I feel like there's something missing, that I'm speaking in Latin while the world converses in the Pidgin English of the web. So this bike art show gave me the chance to explore once again the melding of naturalism and abstraction. We'll just have to see what happens from here.
By the way the title of the abstract painting is "Short Arthur's Oblique and Non-stop Song", in honor of the jazz musician Arthur Blythe. I told you that I likened my art to music!
Posted by Ken Januski at 12:17 PM

Wow, love the new watercolor! That is spectacular! (I guess I'm one of your viewers in the first category.)

As a realistic artist, I actually really want to learn abstract painting. I believe that it would bring so much more to my work. I won't be able to do it this fall, but I may see if I can audit a class at the university during the spring semester.

By the way, I didn't get a chance to leave a comment but I really liked your "The .1 Percent" post. Very well-written.

I'm glad to hear that there are at least some first category readers out there! It's odd with wildlife art because there are always so many people who like it because they love nature and its portrayal and may not have a whole lot of interest or experience with art per se.

I still think I titled my blog correctly with 'Art' being before 'Birds and Nature.' But I don't consider them mutually exclusive and am always doing what I can to show how they can all reinforce one another.

I don't know what to say about abstraction. My father who was a factory worker and had no interest in art made geometrical drawings for me when I was a kid and I filled them in with color. Who knows where his interest came from? But I'm sure that had something to do with my interest in abstraction. When I was very young, perhaps grade school but probably high school, I bought a little book on abstract art. I don't think I got much out of reading it but I did love much of the art. I also had a high school art teacher who encouraged my experimentation. I think more than anything else most of my education in abstraction just came from seeing a lot of art. I wouldn't know where to begin if I were to try to teach someone about it. I'd never really thought about that until you mentioned auditing a class in it.

Thanks for your comment on the .1 percent post. I try to avoid politics, even though I feel strongly about it. Every time I see Piping Plovers or other highly endangered birds though I can't help but think about conservation, and its opponents, and politics, etc., etc.