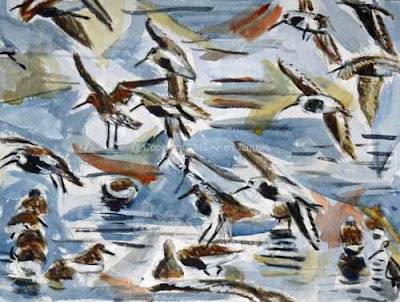 When I was a young ARTIST I had no patience with rules, with constraint, with tradition. Real artists innovated. Since then I've come to realize that this romantic notion is probably one of the most harmful in the last 150 years of art. Art doesn't come out of nothing. The best art, and you can easily see it in people like Cezanne, Picasso, Matisse to name a few modern ones, struggles to both digest and improve the best art that comes before it. Sometimes these struggles can be painful to watch. I remember grimacing at some very early Cezannes. But he was just trying to come to terms with what went before to eventually portray the world as he saw it.
So often I think constraints and tradition are good. Sometimes it's the challenge of fulfilling a specific commission that seems most likely to bring out the most invention and creativity in an artist. You need something to react against.
On the other hand some artists including the long suffering Michelangelo might just as soon boil their patrons in oil. I've never studied Michelangelo's history closely. But it's the impression I've picked up. His patrons, particularly the papal ones, took a lot out of him.
If you think that mentioning Cezanne, Picasso, Matisse, Michelangelo in terms of my own work is grandiose you're right. But I had to think about the idea of constraints in art when my local art center decided that the theme for the next show in June would be 'Bike Art'. I once spent a lot of time riding bikes, often in bad weather up steep hills. I live near the top of the famous 'Manayunk Wall' that is a big part of Philadelphia International Championship, and the reason that there's going to be such a theme for the show.
So I definitely have some sympathy with bicycles, though more with riding than racing. Still I've been in no hurry at all to come up with an art work based on bicycles. I didn't want to work with the constraints of 'bike art.' Eventually the theme was broadened to motion, activity, sport so I thought I might be able to do something based on birds in flight that would work.
The results are at the top, a small watercolor and gouache of part of a Dunlin flock coming in to rest in shallow water. My photo that this is based on shows a remarkable orchestration of wings, legs and torsos. How in the world do they land together without horrendous crashes? There is also a tremendous sense of motion and activity. So that's what I've tried to show here. My brushwork and composition is deliberately rough and frenetic. I've never understood finely detailed renderings of frenetic activity. It has a frozen quality to it that I just can't enjoy.
So that was the idea behind this. I've worked on it three or four times over the last five days. It may be done; it may require a lot more work; and it may end up in the trash bin. I need some time time to digest it and publishing it here always helps in that process. I really didn't want to do this painting. But now that I've spent some time on it I see that it's forcing me to try something different, to be more abstract than I normally am with birds. That's what got me to thinking about constraints in art. Sometimes they can be far more liberating than you ever would have guessed.
As I was finishing the current state of the painting I was enjoying some background music on the radio. I had switched from my usual classical station to an independent rock station. The lyrics 'perpetual motion' were floating about. They seemed perfect for this scene. I had the vague feeling that the performing artists were Creedence Clearwater, a group I've always enjoyed passively, and that turned out to be the case. I've never bought their music and don't know much about them. But I do recall that I almost always notice their music when it's on, and always enjoy it. Thus the rest of the title.
Posted by Ken Januski at 2:13 PM