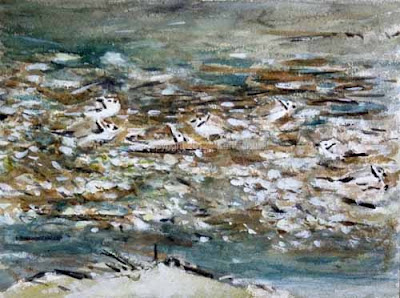 The newest edition of 'Bird Conservation' from the American Bird Conservancy focused on the dangers to the shorebirds of the worlds. A number that jumped out at me was the total estimated world population of Piping Plovers, around 6500. If that number is correct the watercolor and gouache painting above represents about one tenth of one percent of the entire world population.
A little over three years ago I wrote a post on Piping Plovers. In it I covered the same theme. 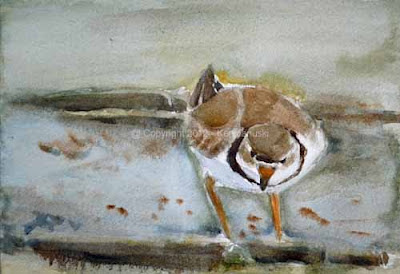 When you see a lone bird, or even more a couple as I showed in the previous post, they are the cutest birds in the world. The problem with this is that for all that it attracts some people to them it probably alienates others as sentimentality. Would people feel the same about them if they looked more like Turkey Vultures? But this isn't the birds fault. They just happen to have an appearance that most humans will I think translate as cute, loveable, harmless, something to be protected.
The most brutal example of the other side of the coin is the bumper sticker I saw at least 10 years ago that said 'Piping Plover Taste Like Chicken.' The ignorance betrayed in this is hard to ignore. Obviously those who designed it and those who sport it on their vehicles think that they're really quite clever. Or course they're not; just ignorant.
But behind it there is a sentiment that occurs in all environmental battles, the fact that much of the audience surrounding the environment or species to be saved considers it worthless or certainly down toward the bottom of things it personally values. I've never asked someone who sports such a bumper sticker what they think it means but my guess is that they think it is a funny joke on people who love cute things and a comment on what their own values are. I'd further guess that their values are pretty self-centered.
I think that civilization, society, or whatever you want to call it, depends upon something broader than self-centeredness, or at least a self-centeredness that realizes that what is good for one's community is also good for oneself. The mighty, isolated island of a person, is a bit of a myth. Recent American politics seems to have completely forgotten this and all the politicians who realize that a concern for the common good, often involving a stomach-churning compromise with people or ideas you dislike, is necessary are either being driven out of office or resigning.
Perhaps I'm misremembering but I recall reading in a new biography of William Buckley, of all things, that there was a time when true Republicans considered it almost a requirement to be concerned with society at large. That is now gone, and I'd say from both parties. Everything seems motivated by self-interest, which in turn seems fed by a voting electorate that also is primarily concerned with self-interest not a concern for their community or society at large. I hope I'm wrong about the voting public. But I don't think so. If I were the extreme fringe of both parties wouldn't get elected.
Well this is a far tangent from where I began. My point though is that conservation really requires a concern for society at large and for society in the future as well as today. It's always seemed to me that the first lesson taught to real estate developers is 'Destroy First, Think About the Consequences Later.' I saw this in my own neighborhood over the last few years as a very old Dogwood and other trees were destroyed so that something else could be built. Of course if never was. Who knows why. But I do know that the dogwood is now gone. Something 100 years in the making most likely. Gone without a thought. And replaced by a small gravel parking lot that looks like an afterthought. Like what do we do now that there's not going to be anything built here and we've destroyed what was here.
It is the idiocy almost criminality of such thinking that makes me always side with conserving the environment first, not chopping down trees first and then thinking about what to do next. What is good for society at large and in the future is sometimes hard to gauge. Maybe some compromises need to be made in order to keep jobs in the community. Maybe it is wrong to destroy the traditional livelihood of people in order to save a species that few of them know or appreciate. So thoughtful compromises probably need to be made. But until we have a society that has some interest in 'thoughtful compromise' I'll stand with enviormentalists and these 'cute' birds. Once they're gone, they're gone for good, with no one knowing the consequences.
Posted by Ken Januski at 10:08 AM