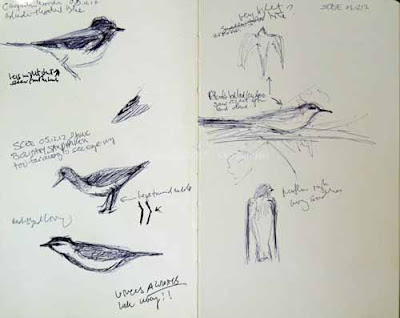 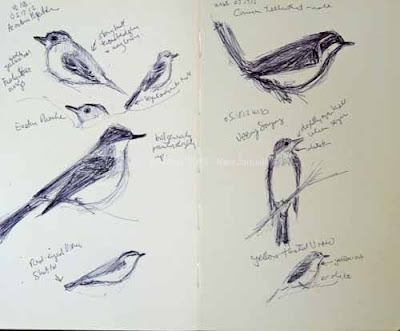 It's a bit difficult to explain the appeal of field sketching to someone who either doesn't sketch from life, doesn't know birds, or both. When I started seriously with field sketching birds about three years ago it was incredibly frustrating. Not only do most of them not sit still but often they're obscured by leaves, branches, etc. It's often easy to ID a bird with partial visual information. But it's much harder when you actually want to sketch it accurately.
I've gone over this theme before so I won't pursue it more here. Suffice it to say that even with the mistakes you see here it's now gotten to the point where it is thrilling to be able fo sketch bird lives.
The bird at bottom left of two pages of field sketches above is supposed to be a Red-eyed Vireo. In the top drawing I was disappointed as I almost always am with my Red-eyed Vireo sketches. I look at them as long as they're visible, try to remember everything I've seen and then put it down on paper. Splat! Another failure. Often I'll check guidebooks afterwards to see what I've gotten wrong. In this case I got a great but brief look at another Red-eyed a day or two later. One thing I noticed, particularly when seen from below, was how short the tail is. That is added information that is added to the second drawing. And I think it makes it seem a little more believable.
I've been lucky enough to see Black-billed Cuckoos each of the last two springs in Philadelphia. But this years, which is shown at the top right of the top drawing is much more successful. After my disappointment with last year's sketch I paid more attention this time. The sketch above it by the way is a cuckoo in flight. I saw this before I actually saw the Black-billed Cuckoo. I had no idea what it was but couldn't ignore the extremely long pointed tail. When I actually found the cuckoo, perched horizontally on a branch as they often are, I knew what the long-tailed bird had been.
All of these sketches are based on my visual memory a few seconds after staring at the bird. The one exception is the Yellow-throated Vireo at the bottom right of the bottom drawing. We saw him as we got into our car after birding at the Wissahickon this morning. In fact I'd already put away my binoculars and had to get them back out. Often these birds seem hidden high in the leaves, singing vigorously but completely invisible. But this one was at eye-level at one point. My sketchbook was also now in the back of the car. But about a half an hour when I got home I did the sketch, based on what I remembered.
Other birds portrayed include numerous Acadian Flycatchers, and Eastern Phoebe, Common Yellowthroat and singing Veery all seen at the Wissahickon over the last two days. The top drawing includes a Black-throated Blue Warbler, Solitary Sandpiper, with badly drawn legs, and a Northern Rough-winged Swallow most seen last weekend as part of the Pennsylvania Migration Count.
Though there can be a certain evocation of the actual even when looking at photos taken of birds seen I always find it very thin. I end up responding to the photo not to my memory of the experience. For evoking the experience itself there's nothing better than a field sketch. I think many artists who draw from life, regardless of subject, will understand this.
As a long time abstract artist I always realized what I was missing by no longer working from life. I gained other things that made up for it, especially an almost total formal freedom. But I'm quite happy to be back drawing from life. There is still plenty of room for abstract freedom.
Posted by Ken Januski at 4:52 PM