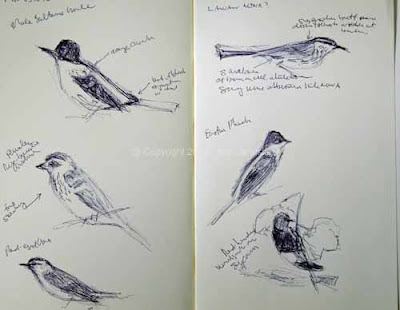 I still have more field sketches from our Cape May trip to post but given all I've seen at home since getting back I wanted to post some field sketches from here. The biggest surprise was a mature Red-headed Woodpecker seen today along the Wissahickon in Philadelphia. This is a bird that's not uncommon in Pennsylvania but is in Philadelphia. I was shocked to find an immature along the Wissahickon last fall and was even more shocked when he stayed until mid-March of 2012, maturing into his ruby red head and other striking black and white feathers.
They did breed here in the 19th century, in fact right along the Wissahickon, but I doubt they've been seen more than once a year in Philadelphia over at least the last 25 years. At least that is the impression that I have after talking to a number of expert birders here. So wouldn't it be thrilling to learn that this one stayed and might even be breeding? Who knows. I haven't seen him in 2 months. Today I found him while chasing a warbler song about 200 yards from where he overwintered. That sure seems like strong evidence for it being the same bird even though he seem to have disappeared for two months. Obviously I'll be keeping a close lookout for him now.
He is in bottom right of sketch above, picking insects off Sycamore leaves. Also above a male Baltimore Oriole, first of year female Rose-breasted Grosbeak and Red-eyed Vireo on left. On right a confusing waterthrush that seemed to be singing a Northern Waterthrush song but which I finally determined to be a Louisiana, an Eastern Phoebe and finally the feeding Red-headed Woodpecker. 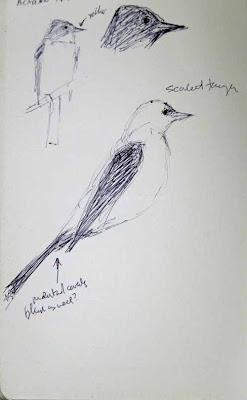 A couple of days ago we had a great look at a male Scarlet Tanager very close to us, not singing but calling his very loud chick-burr call. We also saw our first Acadian Flycatcher in Philadelphia for 2012. Those sketches are above. 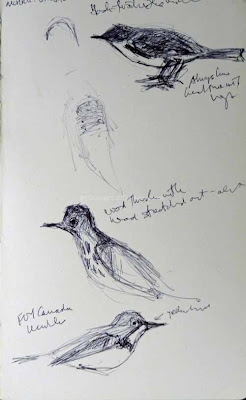 Finally some sketches from Carpenter's Woods. A Black-throated Blue Warbler at top, followed by a very alert Wood Thrush whose neck was quite stretched out, and finally a first of year Canada Warbler.
Unlike the Cape May sketches none of these were done with the aid of a spotting scope. It is so much easier when you have both hands free to draw and go back to the scope to check details. But most passerines don't sit still long enough for a scope to be of much use. This is particularly true of warblers. So all of these sketches were based on looking at birds in binoculars for a few seconds then trying to remember what I saw and put it down.
By the way Blogger seems to have done something recently to eliminate paragraphs and/or line breaks. So text has become jumbled together and very hard to read. I can only hope they fix it soon.
Posted by Ken Januski at 12:33 PM