Field Sketching Around Cape May - 2012 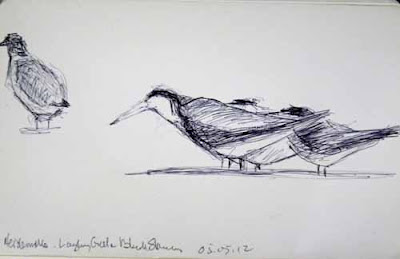 It's hard to imagine anything I enjoy more than seeing birds that I don't see that often and being able to sketch them. For seeing a lot of birds, both in numbers and variety, it's always hard to beat Cape May, NJ and the surrounding area. There are probably/possibly other places in the US that are just as good. It's hard to beat Magee Marsh in Ohio for warblers. But Cape May is very close to us and it's the area I know best.

One problem with sketching at Cape May is that there is just too much to see. Should I sketch or try somewhere else to see more birds? Should I also take some reference photos for birds for which I have no good photos? There are always such decisions at hand. But I've gotten better at spending more time sketching. And my wife humors me and doesn't complain about needing to move on.

That said above is one of my sketches from this trip. All are ballpoint pen in a Moleskine sketchbook. Above three Black Skimmers on a spit of land, with a Laughing Gull off to the left. 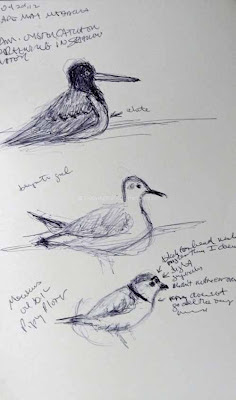 Above is the first page of field sketches from the trip: an American Oystercatcher, in the water and preening. That's why you don't see the feet. Below a Bonaparte's Gull that started off in the water then moved to land. And finally a Piping Plover. The Piping Plovers and American Oystercatchers were both nesting in same area so it was a great opportunity to sketch both. We ended most days with a quick trip, and sketch, through that area. 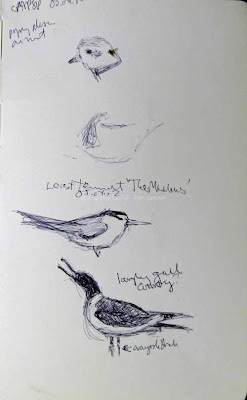 One of the other endangered birds that are protected along Cape May beaches, along with the Black Skimmer and the Piping Plover, is the Least Tern. I was afraid that we were going to end the trip without seeing them. Then on our last night, on the far side of a pond at 'The Meadows' we saw one. That is him above, along with a Laughing Gull and the head of a Piping Plover. 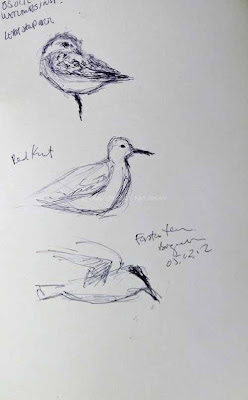 I don't know all that much about shorebirds. But I have the vague recollection that they feed in different areas of any 'shore.' As in many things the bullies crowd out the smaller birds. So it took us a while to find one of our favorite little shorebirds, the Least Sandpiper. He is at top above, along with a Red Knot and a hovering Forster's Tern, just waiting for the right moment to feed. 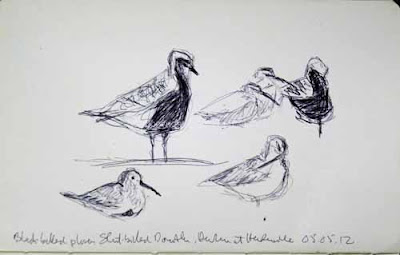 My last sketch was done this morning as we used our last few hours at Heislerville WMA. There were thousands of birds there, probably 90% being Dunlin. But Black-bellied Plovers, Short-billed Dowitchers, Least and Semi-palmated Sandpipers were scattered about, along with yellowlegs and skimmers. In this last sketch I tried to pick out Black-bellied Plovers, Short-billed Dowitchers and Dunlin to show their comparative size and shape. These are less than half of the sketches and I'll probably show more soon. When I got home the mail included 'Bird Conservation' magazine from American Bird Conservancy. I was just realizing how much I enjoy seeing shorebirds and this new issue summarizes many of the threats these fascinating and beautiful birds face. It is well worth reading, and well worth joining American Bird Conservancy.
Posted by Ken Januski at 5:17 PM