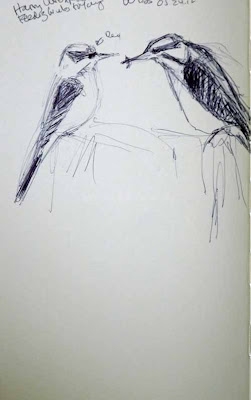 It seems like I don't get that much developed work done during the months of April and May. I'm not sure about June. Because so many new birds are arriving, both migrants and ones that will breed here, there's always a desire to be out in the field, sketching what I see. Above is one of the more interesting sights from the Wissahickon - a male Hairy Woodpecker digging up grubs and giving one to a juvenile. Even though most migrants have passed through there's still a lot of interesting bird behavior to see, much of it family related. 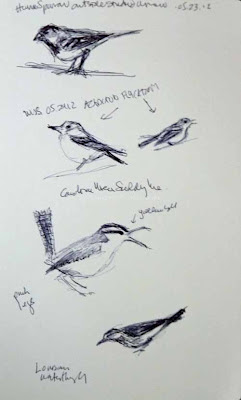 On the same walk where I saw the Hairy Woodpeckers I also stirred up the Carolina Wren above, who wouldn't stop scolding me. I was near an American Robin's nest at th e time but I'm sure he wasn't acting as a cross-species sentinel. Most likely he had one too. There is a competitive edge to much birding as well as an overeagerness to get a bird quickly identified. I don't really like this. It makes it into too much of a sort of shallow game. Check off the bird and be gone, off to check off another one. But many birders also come to love what I've portrayed here, the actual life of birds. The bottom bird in the sketch is a Louisiana Waterthrush. I suspect that he is one of a nesting pair and hope to get more sketches of him and perhaps his family as the months go by. 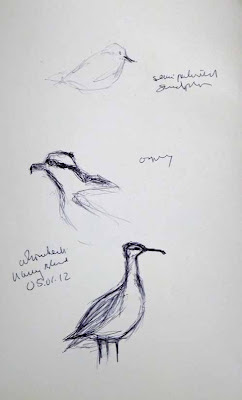 I never posted all of my Cape May sketches so here are a few more. Above a Whimbrel at bottom, one of the many, many that we saw. Above him an osprey. You'd never guess it but I spent at least 15 minutes on it. He was bringing food back to a nest. But he never stayed long enough for me to to anything other than get a bit more of the face. Since they sometimes will sit stock still this was an unusual and somewhat disappointing situation. I kept hoping I'd end up with a full portrait. It never happened. 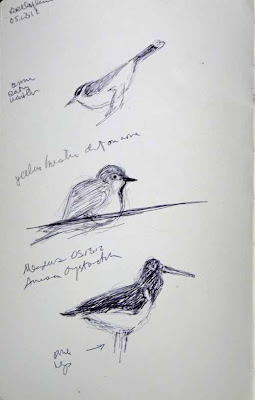 One of the more exciting birds, at least for us that we saw in and around Cape May, was a Yellow-breasted Chat. They are often easy to hear but hard to find. This one cooperated by sitting right out in the open on a telephone wire, though only for a brief period. He was really hunched down, perhaps due to the wind, and looked far pudgier than usual. Above him a Worm-eating Warbler drawn from memory a few minutes after seeing him. And finally one of the irresistible American Oysteratchers. They are so fascinatingly odd that I can never resist sketching them if I have the opportuniy. 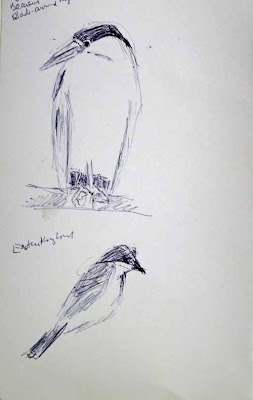 And finally a Black-crowned Night Heron and Eastern Kingbird also from Cape May. The next time we stop at Morris Arboretum in Philadelphia I'm sure we'll see some more kingbirds. But it's always nice to see and sketch the first of the year.
For me there's rarely anything as exciting as field sketches. They have a raw connection to nature that is so often missing in more developed work. And yet more developed work allows me or any artist to use the more formal aspects of art to create something expressive. I love that as well. But when I first started using birds as subject I really didn't want to just use them as skeletons upon which to hang some abstract mark making and design. I think I've accomplished that. No matter how abstract or expressionistic I might be in my work it is always founded in field work.
I'm not sure that there's much of a market for this type of work but at least I am doing exactly what I want to do. You can't ask for too much more than that. Well maybe winning a prize or two. Speaking of which I just heard that I won't be garnering any honors as a BBC Wildlife Artist of the Year. I was a finalist but did not get further than that. This is disappointing and I'm sure when I see the results I'll question some of the winners. But I also know how high the quality has been for some of the former prize winners. It can be a stiff competition and I'm happy to have been a finalist again this year. I look forward to seeing the actual winners. And to see if any are online friends and acquaintances of mine.
Posted by Ken Januski at 2:37 PM

Ken, you've captured nicely some of my favorite parts of watching/sketching birds --- the day to day quiet dramas. I, too, have a hard time staying indoors during these exciting days of bird family drama.

This really is one of the more pleasant parts of birding and sketching isn't it?

We've been seeing a beautiful Yellow-throated Vireo over the last week. I keep hoping that it's nesting and that I'll be able to do some sketches of it and its family.