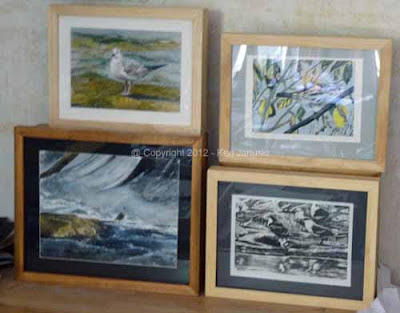 We're at the start of an Excessive Heat Warning here. It goes through the next 40+ hours and won't be exactly cool when it ends. This seems appropriate since the Manayunk Arts Festival starts this weekend. I don't plan things this way but as I think back about the various shows I've been in I often picture myself sweating like crazy, working in incredibly hot weather, trying to ready a show.
Fortunately I'm a bit more prepared for this show and had some advance warning about the heat. So I have most of my work ready to go. Above you see some of the framed work, including two gull watercolors from 2012. That Great Black-backed Gull at Flatrock Dam looks refreshingly cool doesn't he. If I were a marketer I might hope that it might be a subliminal message to viewers this weekend to buy it and instantly feel cooler. 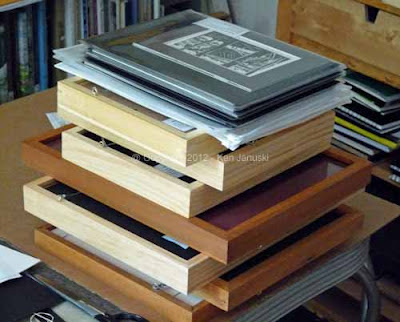 Above you see a stack of seven framed watercolors and linocuts. On top of them are about 15 linocuts, that are in mats but not framed. They'll all go the the Manayunk Roxborough Art Center. Eventually some/most/all of them will be transported along with other work from members, especially five exhibiting artists, of the MRAC coop to the arts festival. There they will be part of the Emerging Artists Showcase at Main and Roxborough.
The festival itself of course wants to showcase the Manayunk area, though artists and crafters from across the US will exhibit. The Emerging Artists Showcase features local artists. Since I live less than a mile from where I'll be exhibiting I guess I qualify as local. You can't get too much more local than that. But it also will showcase the Mayanunk Roxborough Art Center mentioned above. Like many places, especially non-profits, the economic downturn has hurt in may ways: fewer grants, fewer purchases of art, part of whose profits go to the center, etc. MRAC was once a thriving part of Manayunk and Roxborough. The exposure gained at the arts festival will hopefully help to return it to that thriving state Along with art shows it offers many classes as well as literary programs. See the site for more info, or stop by the festival this weekend.
Posted by Ken Januski at 3:17 PM