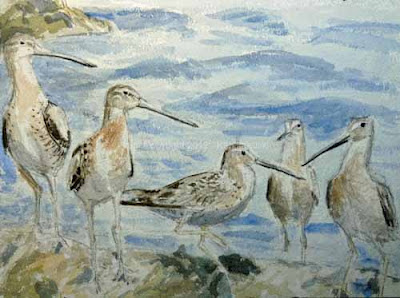 I seem to recall that when looking at some catalogs for various things I will sometimes find them described as 'multi-sourced', meaning that they are put together, or use materials, from various countries. After looking at a number of specimens of extinct birds yesterday and sketching them, then going into an auditorium a few yards away and sketching live birds as they flew about, I realized that I was using two of the main methods of drawing birds, or much of nature: live and from dead specimens.
The third method, available only since the mid-19th century, is of course photography. It is the last source for naturalistic artists, excluding pure imagination. The watercolor above is based on this method. Over the last few days I've worked quite a bit on the underlying sketch, based primarily on one photo I took on Nummy Island this spring. After I got a few watercolor washes down today I erased much of the labored pencil drawing that was underneath.
I'm going to try to keep much of the untouched paper in this one and limit myself to light washes. We'll see. 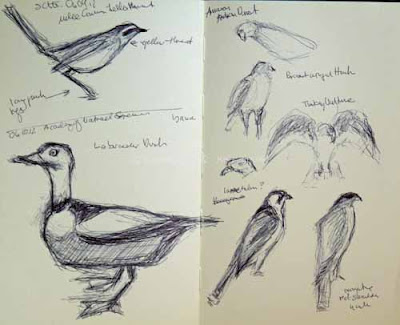 This year is the 200th anniversary of The Academy of Natural Sciences in Philadelphia. June celebrates birds there and this weekend hosted 'Birdfest.' I knew beforehand that certain specimens would be out for viewing. Still it was shocking to stand in front of one exhibit that held a Passenger Pigeon, Carolina Parakeet, Labrador Duck and Heath Hen. These birds were all stuffed, i.e. preserved through taxidermy. Nearby was a huge Wandering Albatross.
I've never worked from specimens before and I didn't really do too well here, being self-conscious as I drew and people walked about to look at the exhibits. But it was just too much of an opportunity to pass up. The Labrador Duck in the two pages of sketches above is the one bird I attempted to portray. Though 'Birdfest' only lasted for the weekend I'm hoping that I might be able to see other specimens next time I'm there.
Other specimens, sadly, were all victims of window strikes found within two blocks of The Academy in central Philadelphia. To see rows of dead warblers, thrushes, woodcock, et al. is a very sad sight indeed. The one good thing about this is that much research is being done as to what might help prevent this including glass that includes patterns visible to the ultraviolet sensitive eyes of birds but not to humans.
In a separate auditorium at the Academy a special show allowed numerous birds to fly free, some perching on the heads of spectators. Included were Amazonian Parrots, Lanner Falcons, pictured at bottom left of right hand sheet above, Red-shouldered Hawk, at bottom right, and numerous other birds. It was somewhat shocking to have a Macaw that seemed to be at least 2 feet in length fly within inches of my head. As you can imagine this show was particularly popular with the younger members of the audience but I doubt that anyone there couldn't remark on the wonder of it. I'd guess that many a life-long bird and nature lover got his or her start in just such a setting. 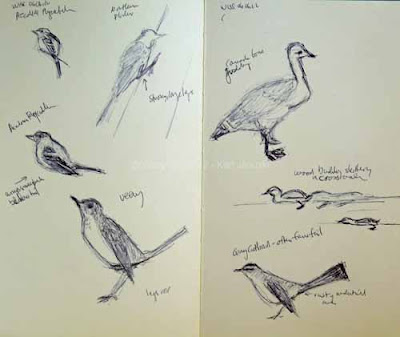 The other source for bird sketches of course is birds in your own outdoor environment. The top left of previous drawings includes a local Common Yellowthroat. The pages above include a Veery, a lone Wood Duckling skittering across the water to catch up with his fast departing family, more Acadian Flycatchers and a few other local birds.
Posted by Ken Januski at 11:49 AM