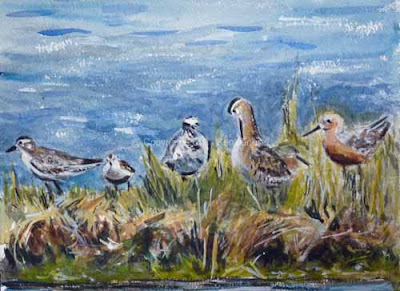 For some people it may seem illogical to think that abstraction in art can only happen after the artist understands realism. Perhaps it's better to say that you can only simplify after you know the complexity of a subject well enough to simplify it, leaving out inessential parts. Until you're really familiar with the subject it's hard to say what's essential and what's not.
Some abstract/modern/non-objective art of course never understands the subject and isn't really interested in doing so. I'm not going to judge whether this is good, bad or neither. But for myself I've found that I do like to understand a subject before I simplify it.
So often I'll use photos as a basis for a painting if I think it will help me learn the birds better. I'm not sure that this works all that well. But I think that there is a mental process of trying to understand the structure of a bird that you see in a photo that can help in understanding. That's particularly true in the second watercolor which I'll show below. But it's also true in the watercolor at top, 9x12 inches on Arches 300# cold press paper.
This is based on the type of scene that I love, a variety of shorebirds. We rarely see the endangered Red Knot but we saw a number at Cape May this year, mainly on Nummy Island near Stone Harbor. He is at right along with a Short-billed Dowitcher, a Dunlin, and two Black-bellied Plovers in a variety of plumages. I hope that as I paint more shorebirds I'll get comfortable enough with them so that I feel free to simplify and abstract when the notion takes me. 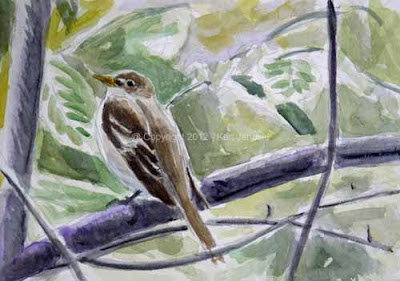 I think that the breeding bird I see most often in summer, if I discount our yardbirds of House Finch, House Sparrow and Robin, as well as the ubiquitous Gray Catbird, is the Acadian Flycatcher. It's not really a common bird, but it is common in some areas that I bird, particularly Wissahickon Creek.
I've done many, many field sketches of it. Today I saw 4-5 and did more field sketches. And yet I feel that I still don't have it down. What is the shape of the head? What is the angle of the bill when seen from below as is so often the case? In an attempt to understand the structure a bit better I did the small 5x7 inch watercolor above. It looks very familiar and I think that's because it's one of the best Acadian Flycatcher photos I've taken so I've used it often. In any case that is the goal of the watercolor above. The new photos I took today of a bird perched just 6 feet away will also be used more than once I'd guess. But soon I think I'll be able to get an accurate field sketch and will no longer need photos.
I think some birders would get bored with the Wissahickon in spring and summer. Just the same old birds. That may be. But until I've mastered sketching them they're always a great opportunity in my eyes. There is always something new to see.
Posted by Ken Januski at 1:19 PM