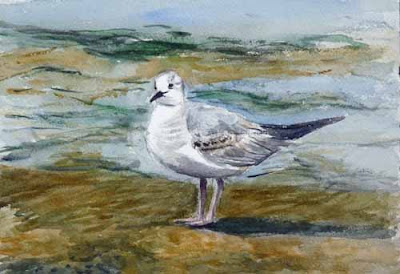 A few months back I posted a couple of pictures of the largest gull in the world, the Great Black-backed Gull. It is a truly imposing bird, though even it doesn't look quite so big compared to the Wandering Albatross I saw at the Academy of Natural Sciences a week ago. The gull above is one of the smaller gulls, the handsome Bonaparte's Gull. This is based on some photos and sketches from the Cape May, NJ area in early May.
I have been doing a number of watercolors recently with the thought of showing them at the Manayunk Art Festival this weekend as part of the Manayunk Roxborough Art Center in the Emerging Artist tent. I actually emerged quite awhile ago but only recently as a naturalistic artist. So 'emerging' still seems somewhat apt. 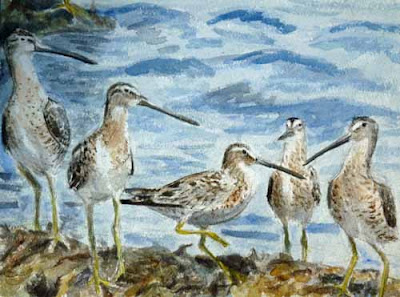 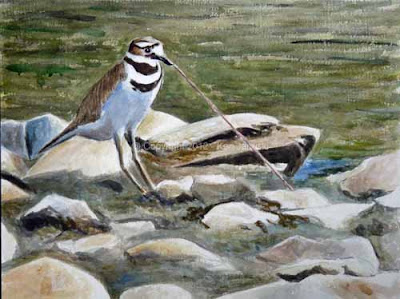 I'm not really sure now what works I'll put in show. There will definitely be many matted prints but I'm not sure about framed works. I've also tweaked the other recent watercolors I've shown here previously, the Killdeer with Worm and the Short-billed Dowitchers at Nummy Island. Above are the finished versions.
As I said I'm still not sure what works I'll be showing. You may need to stop by to find out. Hopefully the near 100 degree weather that is supposed to arrive on Wednesday will be long gone by this weekend.