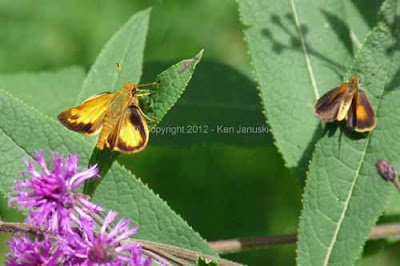 I suppose the typical natural scene of summer depends on where you live. If we lived nearer the coast I'm sure that terns and shorebirds would come to mind as part of a typical summer for us. Here though I think one of the scenes that most typifies summer to me are orange skippers on purplish ironweed. To me it is an irresistible color combination, especially when combined with the green foliage of the ironweed. Yesterday we were at Morris Arboretum scouting out birds, dragonflies and damselflies and found the scene above.
I'd love to make a painting or print from this and probably will at some time. But yesterday I was so out of practice that even my field sketches of two Green Herons and an immature Great Crested Flycatcher weren't much to speak of. I wasn't about to try to sketch butterflies, dragonflies or wildflowers. So I took a number of photos. Only after I got home did I ID the butterflies as Zabulon and Least Skipper. I'm not absolutely sure on the Zabulon but the tiny size and distinct markings don't leave much doubt as to what the small skipper is. And now I have three 'Leasts' that I always love to see: Least Sandpiper, already in Pennsylvania but not seen at Morris, Least Tern, the subject of my last acrylic painting, and now the handsome Least Skipper. 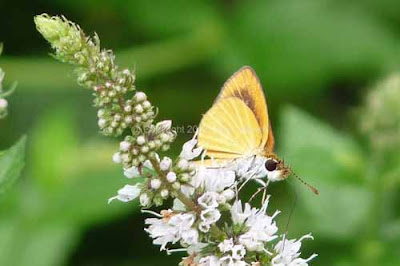 There was quite a swarm of Least Skippers. Though we did see the one on ironweed most were seen on mint leaves, and on the flowering plant above. It's equally as striking a combination as that of skippers and ironweed. The color and shape of the flowers are quite striking. When we saw these skippers most were on mint-like leaves. So we just assumed they were mint. But as I looked at these flowers I was pretty sure that they weren't mint. They did remind me of an agastache that we once grew in our garden. Today I did a quick online search for agastache and now I'm not convinced that this is what it is. Still I think it must be in the mint family. Eventually I'll do a bit more investigating.
It too calls out for a painting or print. Though these photos looked good enough on t he camera they're quite disappointing here. That seems to always be the case with me and photos. And that's why I paint: to try to get the excitement of actually seeing something. 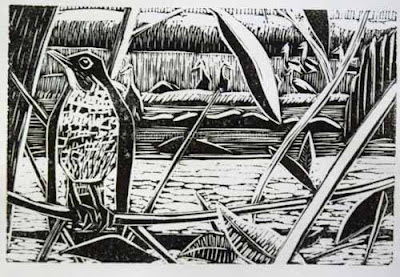 I was temped to title this post 'Good Progress', and then make fun of the title. What other progress is there? If things are progressing then they are good. If not they are regressing and bad. In truth a more accurate title might have been 'Slow Progress' for the lino above and 'Possible Regression' for the lino below. 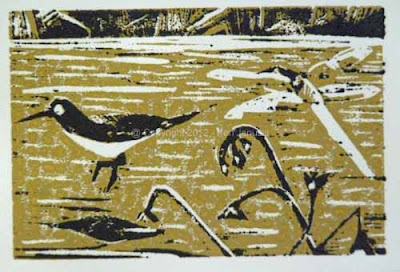 I've said before that much of my art I consider to be a type of orchestration: of color, shape, tone, pattern, texture, composition. Unless I'm just doing a study then it is far more than just putting a likeness down on paper or canvas. Whether or not anyone sees this is secondary. It would be nice but it's generally too much to expect. So I keep changing things, trying to reach my idiosyncratic sense of what looks like a finished painting or print. I wouldn't bring this up except to explain why I've spent so much time on these two prints.
The top one of a Hermit Thrush and Sandhill Cranes at Horicon Marsh in Wisconsin is coming along well and just about ready for me to print an edition. The bottom one now has the second color printed. I was very tempted to leave this lino with just two colors, a golden/ochre and black. But I decided to add a third color, a brown for the sandpiper and dead stems. I'm not happy with the new color. I'm awaiting a shipment of black ink. When it arrives I'll see if the third black color can salvage this. I surely hope so. I will have spent 40 hours on it by the time I'm done. If not it will be a disappointment for sure, but sometimes you just need to have failures in order to learn. Time will tell.