Changing of the Bird Guard 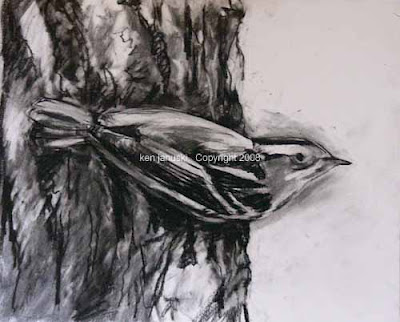 I've been wondering what changes I might find along the Wissahickon when I finally found the time to visit. It's my closest birding patch. But I know that at this time of year I might find more interesting birds at other nearby places like Morris Arboretum. Once migrating warblers arrive on their way south Carpenter's Woods, another nearby site, might be better.

But I miss knowing what's going on at the Wissahickon. When I got there at 8 a.m. this morning one voice was noticeably lacking, the Acadian Flycatcher. It's the most ubiquitous bird during summer, with the possible exception  of the Gray Catbird. Normally I see and hear seven or eight. Today I heard just one.

They seem to have been replaced by Eastern Wood Pewees and Red-eyed Vireos. Both of these birds are here, and somewhat plentiful, during the summer. But they never outnumber the Acadians as they did today. It looks to me like flycatchers may be on the move, especially when I think about the recently seen, and very  unusual here, Olive-sided Flycatcher.

Warblers on the other hand have arrived. I saw at least two Black-and-whites today, the first of the late summer, along with one immature American Redstart, and what I  think was a Worm-eating, though it might have been one more Red-eyed Vireo.

So once again I start a season of trying to sketch warblers. I did do one sketch of a female black and white from memory today, about 60 minutes after seeing it. Horrible! Later I tried a watercolor based on an old photo I'd taken. Horrible!! So finally I illustrated this with a very old charcoal drawing based on the same photo.  At  least it looks like the bird. I know I can draw likenesses from photos. But I  don't want to. I'd like to get where I can do a credible likeness from life. I  recently mentioned the great challengeof getting the complex feather pattern of an immature Green Heron, or that of sun dappled foliage. But another great challenge, and one I'd really like to conquer, is being able to draw warblers live!!

One other thing of note today was the number of birds feeding on Devil's Walkingstick, something considered an invasive by many but not by me. Thrushes, among others love it. Yesterday  we saw a Wood Thrush feeding on it. Today  I saw a number of Veeries, and probably 30 American Robins. Thrushes really  do love it. And at least one of them, the Wood Thrush, is drastically declining in number. One of the states in which it is still doing well is Pennsylvania. Do we really want to get  rid of one of the foods it feeds on?

Even a Black-and-white warbler showed his interest in it today, though he was looking for bugs on its prickly trunk and not eating berries. Hopefully  I'll do a little better annotating my blog on Devils Walkingstick this fall. I would like to continue documenting all the birds that feed on it.

So it seems we've begun a changing of the bird guard. Though summer isn't yet over many  birds have already started migrating south. It's a time to enjoy these beautiful birds one last time before they're gone for a much too lengthy  season.