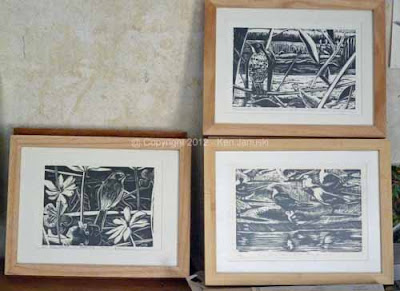 About a month ago I hurriedly finished off the framing, glass cleaning and packing of three prints to send them off to the Society of Wildlife Art's 49th Annual Exhbition at The Mall Galleries in London, UK. Above is a photo of the three prints I sent. I still hadn't switched  plexiglass for glass in the one on lower right so that's why it looks somewhat matte.

Last year I had the great adventure of sending two prints off to the competition and having them sit in customs for weeks. I completely gave up on them being in the show because they were still in customs on the day of final judiging. Then I got an email a week or two afterwards that they  had arrived at the gallery and would be in the show after all. What a thrilling email that was!

I couldn't afford to have them sit in customs for weeks this year because they  needed to be at the gallery for final judging in about two weeks. And they  had to be delivered on one of two specific dates. That meant that I had to find a courier to recieve the shipment then bring them to the gallery on one of the two specific dates. I couldn't just have them delivered by a specific date. I really debated whether I should just forget about it. Again I was thrilled to be pre-selected, but pre-selection seemed to make it less certain of final acceptance than last year when it was only offered to overseas applicatnts. It was only thanks to a courier, PicturePost, in Britain that I decided to gamble on the expense, possible delay in customs and then possible rejection after all of that.

I mentioned this to a doctor a few days afterwards and she said: why bother? Well it's a good question. It's answered in part by this review at Making a Mark . Among the other things it mentions are 'a masterly approach to the printmaking', 'an exhibition which puts a very strong emphasis on the quality of the art and the creative process', and 'the standard of the art in the exhibition is exceptionally good.'

More than that though is the work of the members of The Society of Wildife Artists . I just really like so much of the art of its members. I really  can't think of a group of artists I'd rather exhibit with. As I've mentioned many times I've always been somewhat reluctant to call myself a 'wildlife artist.' Why? Because I found that I didn't like so much of the wildlife art that I saw, especially that which looked like it was based on photographs. The longer I've been at it though the more artists I've come to admire. And many of the ones I most admire belong to the SWLA. It is still hard to believe that last year I exhibited with artists that I  greatly  admire, including some whose books I own. Since I didn't get to London to see the show though,  it still seems a bit unreal to me. The line is on my resume but not the experience.

It's very unlikely I'll get to London to see the show this year, especially as I'm in a three-person show here at the Manayunk Roxborough Art  Center at the same time. But again I can't say how thrilling it was to find out at the end of last week that I'll again be showing at this exhibition. Of course once I found out I was in all the tribulations about cost, customs, possible rejection, etc. quickly faded away.. You just can't beat showing with the artists you most admire.
Posted by Ken Januski at 9:44 AM