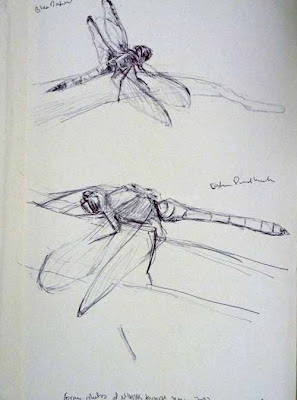 In my last post I mentioned taking some photos of dragonlfies. Recently I've been looking through my photos and just couldn't resist trying some sketches.I last did insect sketches 10-15 years ago. What a difference time makes! In those I had to draw the insects under a dissecting microscope. That was the only  way to see enough detail. I also had to kill them in a killing jar in order to study them.

Today I can take digital photos while they're still alive and active. The magnification is equal to that of the dissecting scope I used to use. Of  coures I can't move them around to see hidden parts and understand the structure better. Without my memory of structure from those old drawings these photos might be not quite as useful.

In any case I've greatly  enjoyed doing these. They are all on Moleskine A4 Sketchbook paper and all done with  a Caran d'Ache ballpoint pen. One thing I immediately remembered as I did them was why  I love drawing insects: they are a marvel of structure and shape and they allow an artist to bring to  bear many skills.

Drawing the nude is mainly an exercise in curvilinear shapes. Drawing from nature often involves amorphous, undifferentiated shapes, at least when it comes to most foliage and many landscapes. Hard edges are there but not all that often and if so broken up by  softness, for instance in tree trunks and the foliage that hides them. But with insects you  can have the sweeping elegant curve of a wing  coupled with  the hard edges of the limbs or thorax. 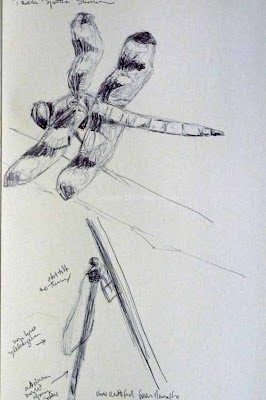 As I've drawn these I found that I couldn't resist trying to capture the shapes of the thorax and head, even when they were hidden by wing and bad photography. One of the appeals of naturalistic drawing, at least for me, is rendering the complexity of three dimensions into two dimensions. I love doing this and sometimes wonder if it's not almost a primitive desire, a evolutionary remnant of early days in the life of man. There is something so satisfying about getting down the structure of something. In any case, before I waft way in the ether, this is one of the things I enjoy about drawing insects.

And of course dragonflies are beautiful as well as having a fascinating life history if you care to study it. Many people will of course love dragonflies for their color, pattern, movement. I do too. But for now it's time to get their structure down. Perhaps in the future I'll be able to sketch them live and add color, trying to  get many of their striking qualities captured all at once.

The sketch at top includes, at least as best I can tell, a Blue Dasher and Eastern Pondhawk. The sketch at bottom has the ubiquitous, at least at Morris Arboretum, Twelve-spotted Skimmer and an unidentified damselfly.
Posted by Ken Januski at 12:00 PM