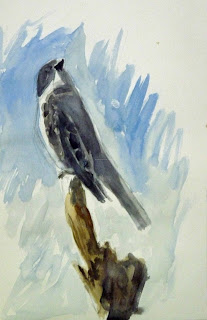 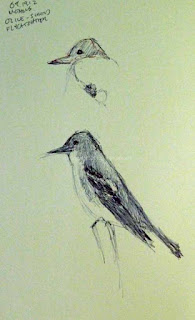 A little over a month ago I saw an Olive-sided Flycatcher at Morris Arboretum. Though I'm well aware of what they look like I took a photo of it because of the color of the underside of its tail, not because I recognized it as an Olive-sided. I didn't I think because it wasn't in the right context. I just don't expect to find them here, even though I've been reading about them migrating through Pennsylvania for the last month.

Yesterday Jerene and I decided to take  advantage of the beautiful weather and visit Morris in the afternoon. Almost as soon as we arrived a large flycatcher landed near us in a large dead tree, a popular spot for many birds at Morris. Sure enough it was another Olive-sided. Above is a quick watercolor done this morning from one of the photos I  took as well as two field sketches done from life. In the second you  can see I've portrayed the white tuft that occasionally is visible behind the tertials on this bird. It's also visible in one of  the photos below. 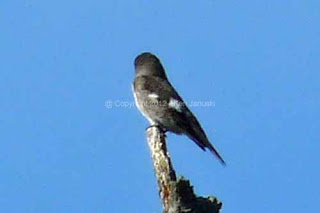 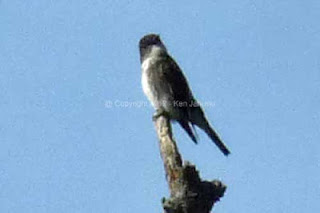 Because this seems to be an unusual bird in Philadelphia I've included the two photos above for ebird reviewers or anyone else who wants more 'proof' than my own say so. In a way I hate to encourage the reliance on photos since they're so often unreliable. But when they're clearcut I guess that they do no harm. Still I do try to avoid them. There are a few trillion blogs with photos. I think some people hunger for something different. 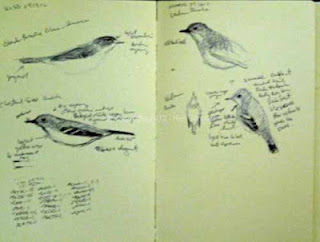 In the page of field sketches above are a female Black-throated Blue warbler, a Chestnut-sided Warbler, an Eastern Phoebe, tiny Northern Parula seem from beneath and another flycatcher that sketching helped me to ID as an Eastern Pewee. I'm still struck by how much sketching is a from of learning, not so much about the skill of drawing as it is about seeing better. It's long been a British tradition with birders. It's too bad it's not so here.
Posted by Ken Januski at 9:25 AM