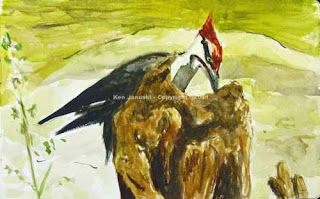 Any local readers may wonder just how I or anyone might propose to make Philadelphia birding better. A very good question. Surely I'm not about to announce my patent on attracting rare birds. No. My discovery was accidental.

The PA Audubon Rare Bird List listserve had an email the other day about an unofficial 'Bird Day' this coming Saturday, September 17. When I looked at the link for Pennsylvania Audubon I found a short article about three bird festivals this weekend. Below that I found a link to a new Fairmount Park IBA Bird Checklist.

It's the latter that's my secret for better Philadelphia Birding. Compiled by Keith Russell of Audubon PA it's a wonderful essay and checklist of birds found within Fairmount Park, including Benjamin Rush State Park. Keith has organized the Philadelphia Mid-winter Bird Census for 25 years. I and Jerene have taken part in it for the last five or six years. Each mid-winter report is a thrill to read, noting what birds are here in early January, and also how their numbers compare to birds seen in previous years.

The new Fairmount Park checklist is the similar but on a much larger scale. Each species is shown in a bar graph that shows frequency by month. Also included in the same bar graph is likelihood of presence in six locations: Wissahickon, Pennypack, East West Reservoirs, Cobbs Creek, Poquessing/Benjamin Rush State Park, and Roosevelt Park. Looking at a random entry I see that a Semi-palmated Sandpiper is only likely to be seen at Pennypack, especially in May, July, August and September. A rarer Philadelphia Vireo is likely to be seen if at all, during September and early October at any of the locations.

Of course there are other Philadelphia locations where birds might be seen. But this checklist encompasses many of the areas available to birders. It's particularly valuable to me since I spend so much time at the Wissahickon. It also makes me more likely to investigate areas like Pennypack, Benjamin Rush or Roosevelt Parks.

What I most enjoy though are the species entries. For instance the entry on the Philadelphia Vireo, a species we THINK we've seen twice at Magee Marsh in Ohio both spring and fall migration was first discovered in 1842 by John Cassin in an area of Fairmount Park known as Bingham's Woods. Now it is observed only during fall migrations with rare exceptions. This type of information is both invaluable and just plain fun to read.

Some beginning birders might find it a bit overwhelming though even for them the graphs and species accounts indicate the likelihood of seeing certain species at certain times and places. It's always good to know how likely birds are to be seen in any locale, regardless of how experienced you are. I think the checklist is most valuable though to slightly more experienced birders. It's thoroughly enjoyable to read a species account and compare it to your own experiences, or to read that species that you rarely see are actually fairly common at Roosevelt Park for instance.

And of course there is the history. To me it's fascinating to know how the Philadelphia Vireo got its name and to know its local connection. In keeping with this historical theme one of the three festivals taking place tomorrow is the Cradle of Birding festival at Tinicum.

We've never been before but are going to try to make it tomorrow. Philadelphia really is the Cradle of Birding in many ways. I always forget that, especially since I have little connection to much of the local birding community. If I had I'd probably be more mindful of it. In any case it is amazing to realize how much of American birding took place here. It should be enjoyable to go to a festival celebrating that. The newly arrived cooler weather should make ti all the more enjoyable.

Finally, if you've made it this far, I did the small 8x5 inch watercolor at top as an illustration of one of our local birds that appears on Keith's checklist. This is based on a photo I took of a Pileated Woodpecker drilling into a dead tree with the Wissahickon behind and below him. The stream, and the large rocks in it, visible through a few inches of water, is what gives the yellow-green color to the painting. I'm not too happy with this watercolor but it does serve it's purpose of illustrating local birds. And it's the first watercolor I've done of one of my favorite local birds. Maybe it will lead to more.
Posted by Ken Januski at 9:44 AM