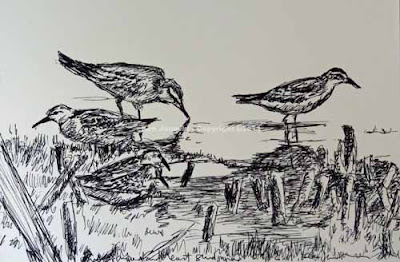 As you may have guessed I can't resist all the verbal tricks that are occasioned by an adjective that also functions as a noun.The 'least' I'm talking about is the Least Sandpiper a very small shorebird, and I believe the smallest US sandpiper.

Some artists I really admire at birdforum.net, Alan Dalton and Paschalis Dougalis, have recently shown work in ballpoint pen. As I recall both mentioned using the ubiquitous Bic pen, though  European versions are not the same as American ones. Still it was enough of an impetus to get me to find some Bic pens and give one a try. One reason for this is that I like the idea of the quick line available from a ball point pen. The line can move very quickly. It doesn't get stuck in the surface of the paper.

A White-rumped Sandpiper is the star of the drawing above. He's what follows the 'And ...' in the title. He's surrounded by Least Sandpipers, all seen at the ponds near the hawk watch platform at Cape May Point State Park. This  was one of many lifer White-rumped Sandpipers that we saw there. What I liked about the photo that this is based on is that it shows how different their poses are. In fact my drawing is a bit off in not having a greater angle in the White-rump. Its tail tilts up about 5 degrees more than I show. So in silhouette it really looks much different than a Least. And of course it is larger and more slender.

I often buy new media with the thought of trying them for field sketching, just like the people who first got me interested in them. But odd things happen and I often try them first at home in the studio. That was the case with this drawing. Now that I've tried it out I do anticipate giving it a try in the field. I really like the sepia Pitt Artists pens that I currently use. But I'd like to also give this a try. You never know where new media will lead

When I lived in San Francisco in the early 70s there was a seemingly universal idea in the air: Try Everything. I didn't and in fact it sounded sort of foolish. It still does. But it's also foolish to get stuck in a rut. For me I've found that I need to digest one medium or method of work enough to get some feel for it. Eventually I'll want to try something new. And I do. But the idea of constantly trying something new is something that's always seemed silly to me. In any case I feel fortunate in being able to change media at a comfortable pace.