The Least I Can Do 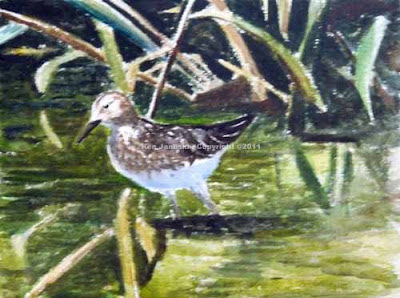 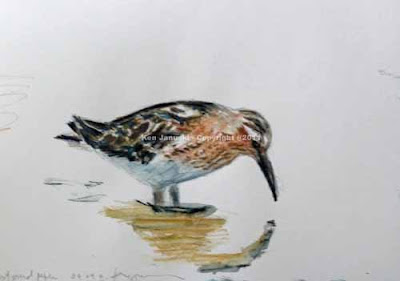 Or maybe the Least (Sandpiper) I can't do. You'll have to judge for yourself based on the images above.

Unlike my last entry of the Whimbrels both of these are based on photos that I took. The larger watercolor on 9x12 inch Arches 300# cold press paper is of an immature Least Sandpiper that I saw at Morris Arboretum in late July/early August. The second is a small drawing using Derwent watercolor pencils on 7x10 Stillman & Birn Gamma sketchbook paper. I believe that photo was taken at Tinicum at the same time, though it also might have been taken in Cape May in mid-August.

I've never liked watercolor pencils. They're not my cup of tea. But I recently realized that some drawings by Michael Warren in his book 'Shorelines' might have been done in color pencils. The drawings struck me as a good way to do quick color sketches in the field. So I brought out my old Derwents. But I immediately started doing a drawing that was more painting than drawing, especially after I added water. So I completely contradicted my original intention of testing color pencils as a way of doing quick field sketches. I and color pencils just don't seem to have a future.

The watercolor on the other hand has its own complications. I've only used this paper a few times before. I thought I'd be happy with 300# pound paper since it should be less apt to warp. That's probably true. But I can't make a clean brushstroke. As though being sucked in by a powerful vacuum as soon as the brush gets near the paper the water and pigment seem to jump off and form a streaky blob. The end result is that I end up working with more pure pigment and a very heavy brush. So the painting gets dark and looks more like an oil painting than a watercolor.

Still you learn something from every medium you try. Or at least you do if you pay some attention. Otherwise things could get very frustrating! I think this is an example of the fact that almost all visual art, and maybe all art, has to be a dialog with your medium. You can never fully control it, though you can certainly control it more than I do. But in the end there's always a give and take. That's particularly true in printmaking, which I may return to one of these days.

By the way the Least Sandpiper is among the smallest of shorebirds, unlike the Whimbrel of my last post. It's on the large end of the spectrum. I rarely see shorebirds in Philadelphia unless I make a special trip to Tinicum. But I'm starting to see Least Sandpipers with some regularity at the nearby Morris Arboretum. It almost seems like they're becoming old friends.
Posted by Ken Januski at 10:06 AM