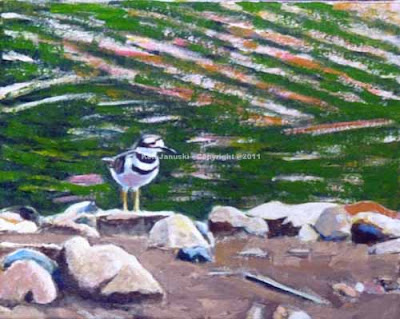 It's been a while since I've really struggled with a painting. I surely do remember watercolors that drove me up the wall - I just couldn't control the medium. And there were some pastels that went on and on.

With watercolor the problem was that I just couldn't get the medium to do what I wanted. It's a very difficult medium.

With the pastels though, and now with this acrylic, it's not so much that I can't control the medium as the fact that I can't figure out what I want to do. Particularly in acrylic it's easy to achieve an effect and get seduced by it. I think all artists know this problem. Sometimes with no effort at all you get something that looks good. Sometimes it just reminds you of the style of another artist that you liked at one time. Because it reminds you of something you liked in another's work it's tempting to accept it in your own.

And there's nothing wrong with this. But I think at least for me there's often a lingering doubt that I'm settling for easy effects and not really painting a personally honest painting. This isn't always true. I'm sure that there are many fellow artists who say of an artist: Why can't he just leave it alone? It looks great now and he's going to beat it into deadness. That's the artist's dilemma I think - knowing when to call it quits and save any urges to change for another painting.

Well this is a roundabout way to say that I keep changing this painting sometimes drastically. The painting at top is version four.

Below is version three. I'm finding a real glare on acrylics that I didn't find in watercolors. That makes it very hard to see. This version was painted late in the day when the light was bad. It got far darker than I intended. 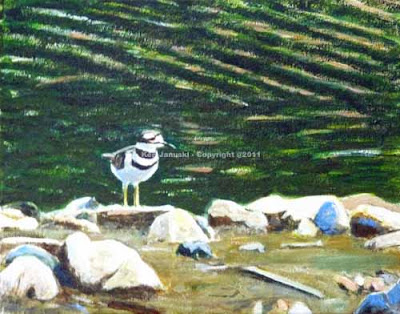 And below is version number two. As with all the versions I felt that the top portion/background didn't work with the bottom portion/foreground. This was the first attempt to solve that. 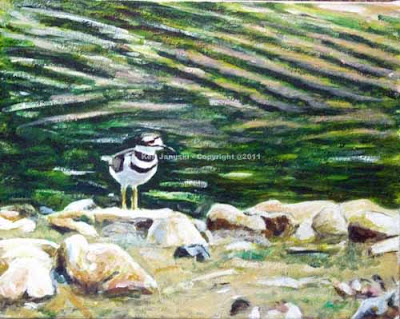 One of the things I've also struggled with is stylization versus naturalism. The bottom portion is slightly more realistic. The top is more stylized. I did have it more naturalistic at one point but didn't like it and quickly switched back. As an experienced artist I have all sorts of influences. Right now the top portion reminds me more of Abstract Expressionism and the bottom a bit of Wayne Thiebaud and all the high key landscape painters, especially those from California where I lived for many years. I remember liking this style all the way back to what I always found to be the source Corot.

But Corot and Abstract Expressionism don't mix, particularly with a bird stuck in the middle.

So I'll be spending some time trying to make this into a honest painting with a unified style. I don't know if it's a curse or a blessing that with acrylic there's almost no limit to the changes you can make!
Posted by Ken Januski at 5:08 PM